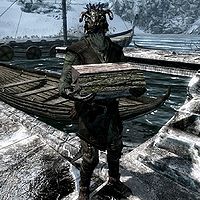 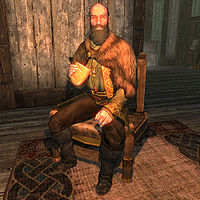 The target of much of Scouts-Many-Marshes' anger

Scouts-Many-Marshes is an Argonian employed as a dock worker in Windhelm. He and his clansmen reside within the Argonian Assemblage and can be seen working around the Windhelm docks. He offers common-level Light Armor training. After completing a task for him, it is possible to marry Scouts-Many-Marshes.

Scouts-Many-Marshes begins his day at 6:05am with a quick breakfast. He will eat for an hour before returning to bed for an extra hour. At 8am, he truly begins his day by going out onto the docks to work. He will spend the next twelve hours of his day begrudgingly working out on the docks. He will return to his bed at 8pm after a hard day of labor to prepare for the next day.

Scouts-Many-Marshes wears a set of clothes and a pair of boots. He carries an iron dagger to defend himself. Besides that, he carries a key to the Argonian Assemblage and a selection of lower-class items and gold.

When approached, he may make a remark on the Argonians' willingness to work for any of the local ships.

"Shatter-Shield, East Empire Company... we'll work for any ship that pulls in, as long as they can pay."

"The water is cold, but it's a lot better than having to work up in the dry air."

Scouts-Many-Marshes may talk about how he wishes there was not the ever present racial tension in Windhelm:

"I wish the Nords, Argonians and dark elves in Windhelm got along better."

Or about how the Argonians are doing the hard work that the Nords are not willing to do themselves:

"We Argonians do the work the Nords don't want to do."

When ending a conversation with him, he may say goodbye in two different ways. If you are an Argonian, he will say:

"I hope we will speak again soon, marsh-friend."

If of a different race you will instead hear:

"May the earth beneath your feet be always soft."

You can ask him about himself.

How long have you lived in Windhelm?
"I came here as a hatchling. The only thing colder than Skyrim is the Nords themselves, but we stick together."

You can also ask about why all of the dock workers are Argonians.

Why are all the dock workers Argonians?
"We work where we can get work. The Nords don't like unloading their ships, so we do it instead.
Sometimes cargo goes missing."

I need training in Light Armor.
"You'll be able to run circles around the big, slow brutes in Heavy Armor."

If you complete the Battle for Windhelm and Ulfric Stormcloak is dead, Scouts-Many-Marshes may greet you differently.

"It's a new day in Windhelm. The Stormcloaks are gone, and so is their prejudice."
Are you glad to see Ulfric Stormcloak gone?
"You have no idea.
Did you know it was his decree that forbade the Argonians from living inside the city walls?
I hope in his next life, he's reborn as an Argonian forced to live in a slum because of some bigoted Nord dictator.
I'm joking, of course, but I'm a lot happier seeing the Empire running things in Windhelm."

A Few Words with You[edit]

Scouts-Many-Marshes will make a comment on how the Shatter-Shields are treating Argonians poorly if you are not currently doing the quest.

"We're used to getting by on scraps, but the Shatter-Shields want everything for nothing."
Someone giving you trouble?
"Torbjorn Shatter-Shield. I wish someone would beat the coin out of his fat fists. He clings to every Septim.
He says an Argonian's labor is only worth a tenth of a "proper Nord worker." My people are not slaves!"

You can offer your sympathies and refuse the quest.

Sorry to hear that.
"We will make do somehow. We always have."

Alternatively, you can accept the quest.

What if I talk to Torbjorn?
"You can try, but we've gotten nowhere talking to him ourselves."

If you succeed in talking Torbjorn down, Scouts-Many-Marshes will thank you by giving you a reward of two fortify-skill potions or three restoration potions. You will also be able to marry him.

Torbjorn will be paying you all more.
"You talked Torbjorn down? I'm impressed.
Here, I was saving this for a rainy day. Maybe now I can afford a few more for my people. Take it."

Scouts-Many-Marshes was originally supposed to visit the New Gnisis Cornerclub, but his schedule never has him go there. While there, he originally took part in a number of conversations with Ambarys Rendar. He could ask Ambarys about the Nords:

And another where Ambarys asks how much he is paid: