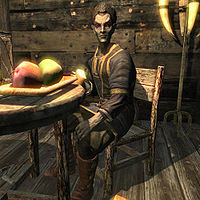 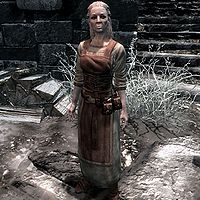 Revyn Sadri is a Dunmer warrior living in the city of Windhelm, in the Gray Quarter. He owns and runs a small pawn shop, Sadri's Used Wares, which also serves as his home. He becomes a possible marriage partner after you complete his favor quest. He is also the brother of the Cruel-Sea clan employee, Idesa Sadri.

Revyn Sadri begins his day at 8am by waking up and opening up his shop. He will tend to his store for twelve hours before closing down and having a short nap. At 8:30pm, he will leave his property to go have dinner at the New Gnisis Cornerclub. He will finally return to his home and place of business at 12:30am, so that he may sleep. He will continue sleeping until 8am, at which time he will wake up to repeat his schedule.

Revyn wears a set of clothes and a pair of boots. He carries an iron dagger to defend himself. Besides that, he carries a key to his store as well as a selection of common loot and gold.

When you approach Revyn, he will assure you of the good nature of his operation.

"All my goods are legitimate, which is more than I can say for some."

He will also comment on his higher than average success level for the Windhelm Dunmer, by claiming he enjoys giving back to the community:

He may also advertise newly acquired products by saying:

"Trader dropped by recently with some lovely pieces, if you'd like to have a look."

Should the Imperial Legion take Windhelm and end the Civil War, he will make a comment on how he enjoys the new state of affairs:

"Can't say I mind the sight of all the Imperial guards. It's a change for the better."

He also has a few other greetings.

"Make yourself at home, please. Let me know if I can be of any assistance."

If you idle in his shop without speaking to him, he may say one of the following:

You can ask him about his wares.

Who supplies your goods?
"I've scraped this collection together by whatever means I could.
I do some business with the trade caravans, and I've picked up a number of items from adventurers like yourself.
A few intrepid souls even brought some items back from Morvunskar, the fort southwest of the city."

While working, he will end conversations by saying:

After work hours, he will instead say:

If you complete That Was Always There by doing what he asks, you can ask him to train you in speechcraft.

I'd like training in the art of Speech.
"Well, you've come to the right place."

The local guards and Aval Atheron will both occasionally direct you to his shop, citing it as a good place to unload unwanted goods.

Viola Giordano can direct you to ask Revyn about the amulet you found while investigating the crime. You can ask him about it during the quest.

Do you know anything about this amulet?[verification needed — need exact wording]
"Are you joking? Even I wouldn't sell something like that.
They definitely have some magic in them, I can tell you that much. But it's nothing I know about."

You can ask him if any of his goods are stolen, to which he will reveal a grave error he's made.

Nothing in here is stolen? Nothing at all?
"Of course nothing in here is stolen. Only a careless, shameful, idiotic fetcher would do something as stupid as to buy pilfered goods....
Oh by Azura, I've made a terrible mistake. I bought a gold ring, and Viola Giordano has been missing a ring that looks just like it."

You can accept a quest from him at this point.

I could return the ring for you.
"It's not that easy. She'd go to the Jarl if she knew I was even remotely involved. You have to get it to her some other way.
Look, it's dangerous, but if you sneak the ring into her house. Put in [sic] a dresser or something. I will make it worth your while."

You can also reject the quest.

Tough luck.
"You're telling me."

If you accept the quest, he'll call out to you as you leave.

Revyn Sadri: "Don't let Viola catch you in her house."

If you return to him before completing the task, he'll remind you of what to do.

Revyn Sadri: "Sneak that ring back to Viola before we both get caught."

If you accept the quest, you will either have the option of doing as Revyn says and breaking into her home and returning the ring, or just returning the ring to her directly. If you reveal the truth to Viola, she will state that she intends to punish Revyn for his crime, and give you some gold as compensation as well as allow you to marry her in the future. Revyn's disposition towards you will drop due to this, but he will still offer his merchant services.

Completing the quest by planting the ring will have him instead ask if the job is done when you next visit him.

"Have you taken care of that... little problem?"
I placed Viola Giordano's ring in her house.
"Thank you. Thank you! Azura's Prophecy always guide you to fortune.
Speaking of fortune. Here. Everything I earned from my last shipment. It's yours."

If you complete the quest by planting the ring, he will gracefully thank you for your services with gold. You will then be able to accept speech training from him up until level 50, and gain the ability to marry him.

In the cornerclub, he can occasionally be seen chatting with Niranye.

Revyn Sadri: "Niranye, I just have to know -- what is your secret?"
Niranye: "My... my what, now?"
Revyn Sadri: "You know. Where do you get your goods? I am always amazed at how you manage to sell things so cheaply."
Niranye: "Oh, just a matter of finding the right suppliers."
Revyn Sadri: "Well, I'll want to meet them next time they're around. Maybe you can give an introduction."
Niranye: "I'll consider it. Many of the people I deal with are... secretive. You know how it is."
Revyn Sadri: "Of course! I undersand [sic] completely. You just put us in a room, and I'll do all the talking. No worries at all."