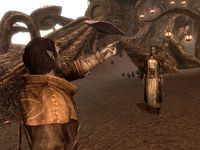 "It's on your head if something goes wrong."

When you arrive in Tel Mithryn, you'll find Talvas Fathryon and Varona Nelas in the middle of an argument. Talvas is attempting to summon an ash guardian, but is having no luck. Enter the main tower of Tel Mithryn and speak to Neloth, then exit again. As soon as you leave, you'll see Talvas' summoning has finally worked. He'll run to you in a panic: the ash guardian he got is hostile!

You'll have several reply options. However, even if you tell him to clean up his own mess it's no use: the quest will start and the enemy nearby will disable fast travel. Head down the "leg" of the mushroom and confront the ash guardian out in front of Tel Mithryn. Be prepared for a tough fight at lower levels: this creature is level 30 and spews ash at long range that is also wide-arcing.

Once the wayward summon is defeated, you'll have to talk to Talvas again. He's fled into Neloth's tower, so go find him. "What a relief," he says once you have reported in. "I don't have any gold I can pay you with, but I can give you this staff." He will then prove true to his word and present you with a staff or offer to teach you Conjure Ash Guardian if your conjuration level is high enough. In addition, you can now purchase the spell tome for Conjure Ash Guardian from him. [verification needed — see talk page] as well as recruit him as a follower.

This Skyrim-related article is a stub. You can help by expanding it.
Retrieved from "https://en.uesp.net/w/index.php?title=Skyrim:From_the_Ashes&oldid=2109801"
Categories:
Hidden categories: