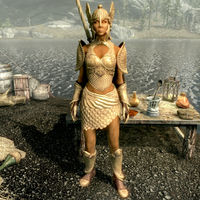 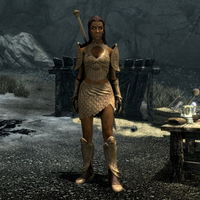 Staada is a Golden Saint who set up camp under Solitude's rock arch on the southeast side of the Karth River, directly under the Blue Palace. She is met during a miscellaneous quest started by reading A Request to Meet, delivered by a courier after the quest Restoring Order.

You must be the one that sent that note.
"Indeed."

The following lead to peaceful resolutions, and she will reward you with her own helmet and teleport away:

The following leads to a battle, and the end result is that she teleports away and you lose the chance to get her helmet:

I have the artifact you seek, but I think I'll be keeping it. So long.
"Fool! What do you think you're doing?"