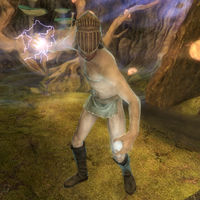 Thoron is the main antagonist of the Saints & Seducers creation. His damage abilities are Chain Lightning and Lightning Bolt. For defensive spells he will cast Ironflesh and Greater Ward. For healing, he casts Close Wounds. He also knows the spells Command Daedra and Expel Daedra, and might use them to dispose of any Atronachs or Familiars you summon.

This Skyrim-related article is a stub. You can help by expanding it.
Retrieved from "https://en.uesp.net/w/index.php?title=Skyrim:Thoron&oldid=2157409"
Categories:
Hidden categories: