While speaking to Sheogorath about Jyggalag, a messenger enters the throne room, informing him that the home of either the Dark Seducers or Golden Saints (depending on your choice during the Ritual of Accession) is under attack. The lord of your opposite house has betrayed their own army to the enemy. During conversation with Sheogorath, you can also learn something rather unsettling. Sheogorath has a real split personality: he is Jyggalag. He provides some brief explanation as to the cycle of the Greymarch to better clarify this fact, and then orders you to assist the army that is under attack.

Travel to the appropriate stronghold and speak to the Captain and her entourage, who are awaiting your arrival just outside the gates. The Captain will inform you of their Lord's treachery, the subsequent imprisonment of their commander and the nature of the Wellspring. The remaining Duke/Duchess, either Thadon or Syl, led Knights of Order into the Stronghold and assisted them in capturing the fortress. The Wellspring, the heart of each Stronghold, resurrects the Saints or Seducers should they die. To this end, the Forces of Order have imprisoned their commander and are attempting to halt the flow of the Wellspring.

Make your way through the Fort, eliminating any Knights and Priests that cross your path. Both strongholds are linear and essentially the same in terms of layout. Towards the end of the second zone, you will find the Commander imprisoned upon a raised platform, surrounded by four walls of Order Crystals. To free her, activate the Chime, and the Order Crystals will break away. The Commander will thank you, instructing you to escort them to the Wellspring and offering her assistance.

All's Not Well at the Wellspring[edit] 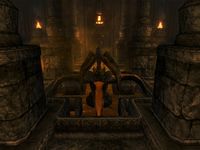 Wellspring of the Aureal 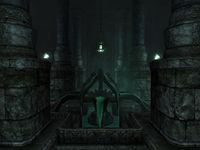 Continue through the second zone and descend to the third zone, where the Wellspring is located. Unfortunately, shortly after entering, your captain will inform you that the flow of the Wellspring has been halted, before she and the remaining soldiers turn to stone. Leave your petrified entourage and continue alone through the rest of the third and fourth zones.

The Wellspring is heavily defended by Order Forces, and much like Passwall was, has been 'Ordered': tall Order Crystals have entombed the center of the Wellspring. Eliminate the Knights and Priests and ring each of the Chimes in the four corners of the Chamber. The Order Crystal blocking the Wellspring should shatter. Shortly after, you will again be approached by your now reanimated Captain, who will thank you for your assistance and invite you to assist them in killing the remaining Knights.

Finish off the remaining Order Forces and speak again with your Commander. She will grant you the power to summon either a Dark Seducer or a Golden Saint, as well as a suit of armor and helmet, respective to the faction that you have just saved. Return to New Sheoth and report your success to Sheogorath.