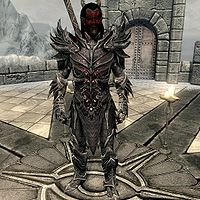 The Unbound Dremora is a special summon you get from Phinis Gestor during the Conjuration Ritual Spell quest. A hostile Unbound Dremora can also be summoned using the Atronach Forge in the Midden after the quest is complete.

The Unbound Dremora wears a set of Dremora armor and carries a random leveled weapon with a fire damage enchantment.