The UESPWiki – Your source for The Elder Scrolls since 1995
< Skyrim: Plague of the Dead: Quests
Jump to: navigation, search 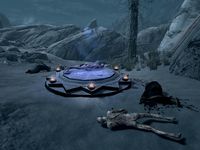 Once you've installed the Plague of the Dead Creation, you will receive this quest along with an anonymous letter. Read the letter to learn that a group of Necromancers plan to perform an ancient, dangerous summoning ritual to conjure an army of zombies. The ritual site is located high in the mountains southeast of Helgen, just north of Southfringe Sanctum (map).

Once you arrive at the ritual site, you will find a group of decomposing zombies standing over the bodies of the slain Necromancers. Clearly the ritual was successful, but the Necromancers lost control of their summoned undead. Defeat the zombies and approach the body of the Necromancer marked by the quest marker. He will be holding Spell Tome: Conjure Foul Zombie as well as a journal. Read the journal to complete the quest and learn of the consequences of the ritual. You can also loot the area for two copies of Spell Tome: Conjure Zombie.

Following the conclusion of the quest, you will have a chance to encounter zombie horde world interactions randomly in the wilderness.