Necromancers are enemy spellcasters who specialize in Conjuration, particularly in the semi-legal school of necromancy: reanimation and suspension of the dead. They can be found in Warlock lairs or gathered around ritual or burial sites in the wilderness, frequently accompanied by skeletons or other undead, and will summon more undead allies when in combat. These mages belong to the Conjurer NPC class. 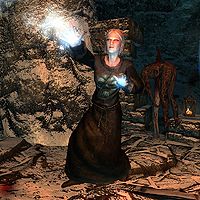 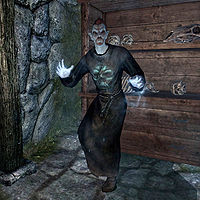 Necromancers rely on their reanimated allies and Destruction spells in combat, and carry a leveled dagger in case of close-quarters fighting (iron, steel, orcish, dwarven, elven, glass, or an enchanted dagger of any quality from iron to Daedric).

In addition to the gear listed above, necromancers have a small chance to carry potions, poisons, soul gems (including a higher chance for black soul gems above level 20), Novice or Apprentice level spell tomes, ingredients (common, uncommon, or rare), recipes, and a small amount of gold. 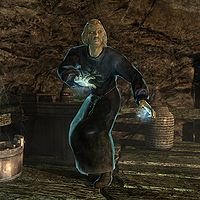 These four necromancers are found accompanying the Ritual Master at Wolfskull Cave during The Man Who Cried Wolf. The group includes a Breton woman (0009655b), a Dunmer woman (000e1036), a Nord woman (000e1037), and a Nord man (000e1049). They will have the same leveled stats as a generic necromancer of the appropriate level, but are all named "Necromancer".

For more information on necromancy in the Elder Scrolls universe, see the lore article.