Conjurers are Conjuration specialists who prefer to summon Daedra in combat. They are typically found in a few caves, keeps, and ruins across Skyrim known as warlock lairs. These mages belong to the Conjurer NPC class.

The type of conjurer you encounter depends on your level. You will continue to meet low-level conjurers even at high levels, but boss-level conjurers will always be at the highest possible level. 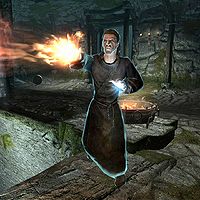 Conjurers use Destruction magic and summon allies to fight for them in combat, and they carry a leveled dagger in case of close-quarters fighting (iron, steel, orcish, dwarven, elven, glass, or an enchanted dagger of any quality from iron to Daedric). They also have a 10% chance to carry a leveled Conjuration or Destruction staff.

In addition to the gear listed above, conjurers have a small chance to carry potions, poisons, soul gems, Novice or Apprentice level spell tomes, ingredients (common, uncommon, or rare), recipes, and a small amount of gold. They also have atronach forge recipes in their inventories, but their chance of appearing in-game is set at 0%.

Master Conjurers and Arch Conjurers have the same gear as lower-level conjurers, but have a 50% chance to carry a Staff of Chain Lightning, Staff of Fireballs, or a Staff of Ice Storms and do not have the leveled lists for atronach forge recipes.

^1This Master Conjurer appears in leveled lists with conjurers, but is actually a Pyromancer, and has the appropriate class, spells, and perks for a generic fire mage of the same level.

An Apprentice Conjurer and her Flame Atronach