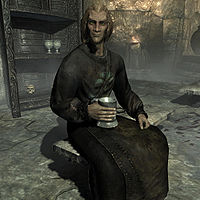 During and after the banquet he will switch between eating or just pacing around the dining hall.

In addition to the gear listed above, he also has a small chance to carry potions, poisons, soul gems (including a higher chance for black soul gems above level 20), Novice or Apprentice level spell tomes, ingredients (common, uncommon, or rare), recipes, and a small amount of gold.

During The Taste of Death, he may greet you with, "Ah, the new disciple. I hear you have quite the appetite." as well as asking expectantly, "Is dinner ready?"

After the quest, Sanyon will greet you with, "Praise to you, champion!"