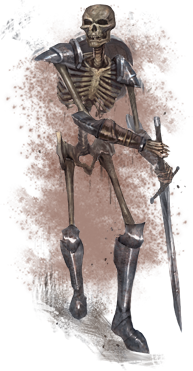 Skeletons are a form of Undead consisting of the reanimated bones of the dead. They're often found protecting the dungeons, forts and ruins of Tamriel. Many varieties of animated skeletons exist, some stronger than others. Skeletons have a certain resistance to edged weapons and frost spells. Though the skeletons of humans and elves are generally the same, Orcs have different skulls due to the tusks on their lower jaw, and beast races such as Argonians and Khajiit have different skulls overall.

Skeletons are often raised by necromancers, and are classified as the Reanimated undead among scholars.[1] The reanimated undead have no sense of self or memory of their past lives when animated using minor Daedric spirits.[2] They are more malleable, easier to command, and capable of following simple orders; a necromancer's perfect basic servant.[2] The longer a corpse remains inanimate, the less of a hold the spirit of the corpse's original owner has on it.[3] A necromancer's spell is capable of gathering scattered fragments and knitting them together with necrotic bindings, allowing the skeleton to move.[2] There are several advantages to using skeletons over zombies as minions. Reanimated skeletons won't drop bits of rotting flesh in a necromancer's ritual circles or lair, and have a tendency to be sturdier, quicker and more dangerous than zombies.[2]

Necromancers who seek to raise skeletons can pull bones from a fresh corpse or a live subject, though the latter is more difficult, as it requires more powerful spells to accomplish.[2] The newly dead provide strong, sturdy bones that can deal and withstand punishment with equal facility.[2] Newly dead skeletons also tend to be more agile, though they display a certain clumsiness common to all new-born creations.[2] Necromancers can also pull skeletons out of crypts and graveyards to find fodder for their reanimation needs. Older bones often hold great power. Older bones tend to shatter quicker than bones harvested from a fresh corpse, but compensate for their frailty with the fact that they potentially hold more power for the necromancer to command.[2]

The mortal races aren't the only ones whose bones can be brought back from the dead. The skeletons of animals can also be reanimated. Necromancers with a lack of understanding of a beast's anatomy will find their creation hobbled and deformed.[4] They lack the strong bonds between body and soul that more advanced beings possess, and are mostly devoid of awareness.[4] Reanimated animals are mindless puppets that must be controlled with total concentration.[4] Skilled necromancers can produce undead with instincts similar to that of their living counterpart, but these constructs are often disturbed by their condition and are very difficult to control.[4]

When voriplasms finish devouring their prey's flesh, instead of spitting out the bones, they sometimes retain the skeleton, clinging to it like a new layer of skin.[5] Essentially, the voriplasm "wears" the bones backwards: instead of wearing the bones on the outside, the voriplasm encases the skeleton, and is in control of movement.[5] Voriplasms use skeletons to give their ooze form and definition, having them walk around and attack without the aid of necromantic energies or other supernatural occurrences.[5] Travelers in Murkmire may come across these corpses, known to scholars as "voriplasmic corpses".[5]

Skeletons were used by the Order of the Black Worm during the Planemeld. In the Imperial City, skeletons were made to dig in the Memorial District to aid in Molag Bal's search for the Sublime Brazier.[8]