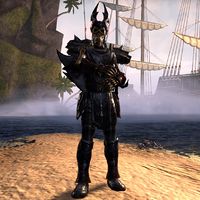 Captain Blackheart is the undead leader of the pirates of Blackheart Haven. He can be found in the cove at the final part of the dungeon, next to his ship: the Black Death. During the battle with him, he will be accompanied by Bone Scouts and Undying Pillagers.

Blackheart came to be in this state after making a deal with Molag Bal. His log can be found on the beach. 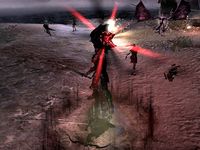 Black Plague
Temporarily turns a group member into a Skeleton, where they are unable to attack or cast abilities.
Cleave
The boss spins around dealing moderate physical damage around itself as indicated by a red circle.
Summon Bone Scout and Undying Pillager
The boss summons Bone Scouts and Undying Pillagers to attack the party. These adds while weak will spawn constantly, and thus players may want to clear them out while damaging the boss if possible.

After he is approached:

When he first summons his undead crew:

Captain Blackheart: "My crew will rig the mast will your entrails. Get up, boys. Time to earn your keep!"

Using Black Plague on someone:

Captain Blackheart: "Let me fix that complexion for you!"

This Elder Scrolls Online-related article is a stub. You can help by expanding it.
Retrieved from "https://en.uesp.net/w/index.php?title=Online:Captain_Blackheart&oldid=2341072"
Categories:
Hidden categories: