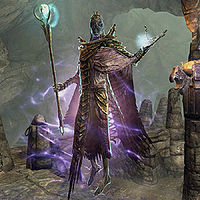 Dragon Priests were originally members of the Dragon Cult of ancient Skyrim. Many of them have achieved a state of lichdom, and retained much of their power through the eternal worship of their draugr servants.[1][2] When they were living, they ruled over countless armies of men in their gods' names. They are now found residing in coffins throughout areas of prominent Dragon worship, many of them sealed away and imprisoned using four sacred fires maintained by the priests of Kyne. It is believed that only one with the voice of a Dragon could truly slay a Dragon Priest. This was the only known way a Dragon Priest such as Morokei could be slain.[3]

If their sleep is disturbed, Dragon Priests were known to burst out of their coffins with considerable force and prepare to destroy whomsoever intruded upon their resting place. The highest-ranking priests of the Dragon Cult were granted magical masks that defy the laws of time and possess powerful enchantments. The individual masks are made of varying materials, and each bears the same name as the Dragon Priest that possessed it.[4][5]

Similar to their brothers in Skyrim, the Dragons of Elsweyr recruited faithful mortals of the New Moon Cult to serve as Dragon Priests.