The UESPWiki – Your source for The Elder Scrolls since 1995
< Lore: Artifacts: F
Jump to: navigation, search 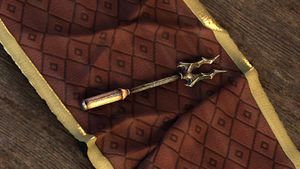 The Fork of Horripilation

The Fork of Horripilation is a cursed artifact created by the Daedric Prince Sheogorath, who refers to it affectionately as Forky. In appearance and in function, it is a mundane iron fork. However, it is imbued with an enchantment which excites and synergizes magicka around it, and can produce dramatic results when held by certain people. Sheogorath is fond of forcing mortals to use it as a weapon, in which case it curses the wielder with Fork's Wound, a magical effect which stunts the wielder's magicka or drains it completely. The term horripilation refers to the standing of hairs on end due to cold, fear, or excitement. In the context of the fork, excitement arises within Sheogorath when he convinces mortals to use the fork,[1] while fear is evoked in mortals from just touching it, resulting in horripilation. The Fork smells lightly of roast beef.[2]

In the Merethic Era, Sheogorath paid a visit to the Dragon Priest Korthor in Vuldngrav, during the time of the Dragon Cult in Skyrim. The Mad God "lost" the Fork during this visit, and Korthor was later entombed in Vuldngrav with it. In 2E 582, Arch-Mage Shalidor and the Vestige recovered the Fork from Korthor during one of Sheogorath's trials.[3] Later that year, Sheogorath manifested as the Skooma Cat in the Two Moons at Tenmar Temple in Anequina, and spread madness throughout the temple. He plotted to convince the priests to blind themselves with the fork in order to be hidden from the dragons currently plaguing Elsweyr. He was stopped by the Vestige, who located and confiscated the Fork.[4]

In 3E 427, the fork was in the possession of Big Head, a mad Argonian hermit and a worshipper of Sheogorath who lived in a small shack on an island in the Sheogorad region of Morrowind. Big Head was obsessed with forks and spears, which he had filled his hut with. Sheogorath instructed the Nerevarine to kill a giant Bull Netch with the fork. Big Head willingly gave the fork to the Nerevarine, who then killed the Bull Netch and returned the fork to Sheogorath to earn the Prince's favor.[5]

In 3E 433, Sheogorath returned the fork to the Shivering Isles, his Plane of Oblivion. Rumors circulated among the mortal population of the Isles about its return. Big Head entered the Isles in search of the fork, which "sang" to him, and took up residence in Bliss, where he collected a great many forks. The fork was of great importance to both the Heretics and Zealots, two outcast religious factions. The Heretics had obtained possession of the fork and had taken it to Longtooth Camp, near the Gates of Madness on the Mania side of the Isles. However, news of this reached the Zealots, who launched an attack on the Heretic base. The Fork supposedly changed hands several times, with the Zealots bringing it to Hardscrabble Camp, their nearby base in Dementia, only to have it reclaimed by the Heretics. Eventually, Big Head requested the assistance of Sheogorath's Champion, who then learned of its location from the beggar Bolwing. The Champion recovered the fork from the outcasts and returned it to the grateful Big Head.[6]

Sometime after the end of the Great War, circa 4E 180, the Warrior came across the Fork in their journey. The method of its acquisition is conflicted, however; some claim that it was obtained from the plane of Oblivion known as the Abyss, while others believe it was looted from a chest.[7]

In 4E 201, Sheogorath used the fork to pin a note to a wooden keg in The Retching Netch, a cornerclub in Raven Rock on the island of Solstheim. The note proposed a combat trial, offering the Staff of Sheogorath to whoever used the fork to kill two specific Bull Netches on the island in single combat.[1] The Last Dragonborn accepted the challenge and killed the netches, retrieving from their corpses the necessary components to craft the Staff of Sheogorath.[8]