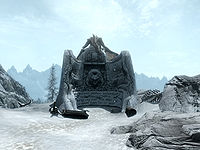 Shearpoint (also called Shearpoint Mountain)[1] is a mountain found in the region known as the Pale, in the province of Skyrim. The mountain marks a point where the borders of Eastmarch, the Pale, and Whiterun all meet at once. There are several Dwemer ruins found on the mountain's north face, such as the former city-state of Raldbthar. The White River forms a valley that separates Shearpoint and the Throat of the World, while the snowfields surrounding Lake Yorgrim separates the mountain from Mount Anthor.[2]

Underneath the mountain was once a large deposit of Aetherium that was heavily extracted by the Dwemer clans of Skyrim in their prime. The city-state, Raldbthar was the main source for the blue crystal.[3] At the summit of Shearpoint is the burial ground of the Dragon Priest, Krosis. It was later turned into a dragon lair.[2] A stone word wall was also built on the summit, dedicated to Oskar the Fool, whose thu'um was not as strong as his clan's signature voice. It was built by his brother, Modir the Far.[4]