The UESPWiki – Your source for The Elder Scrolls since 1995
< General
Jump to: navigation, search
Twitter Archive
by Zenimax

This is a collection of posts from official Zenimax, Bethesda, and Microsoft owned twitter accounts that comment on The Elder Scrolls setting. 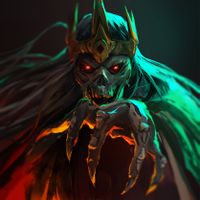 Did You Know: With its two gigantic moons, solar eclipses can happen in #Tamriel several times a year & are known as “Vampire Days” #SolarEclipse2017

You raise your hands, telling her you mean no harm. Despite her macabre decorations, she might make a valuable ally.

"What is it you're looking for, rover?" she asks, blade steady.

You tell her you'd heard rumors about Briar Rock Ruins. She looks both amused and concerned.

"Dangerous place. Briarhearts and Hagravens galore. I can point you in the right direction once we're out of here."

You nod in thanks. The two of you you press on, her wolf leading the way through the tunnels.

After a short walk, you see natural light again. The cave opens above a road.

Kelinoch takes a moment to tousle the fur on her wolf's head before pointing over to some ruins in the distance. "Head that way, but don't say I didn't warn you when you see what's out there."

She turns, heading back into the cave and leaving you alone on the precipice.

You notice three adventurers riding along the road, and one raises their hand to wave. You return the gesture, heading down to meet them. ⬇️

A disturbance roils in the distant sky, turning the land crimson as you approach. Recalling gossip you overheard on your way to Markarth, you realize this is a harrowstorm!

You exchange glances with your new companions as you decide what to do. ⬇️

After drawing your sword and thrusting it into the air, you let out a roar and charge toward the harrowstorm. Your companions fall in step beside you.

Below the storm, several other brave adventurers battle a wave of evil creatures.

Your foes seek to overwhelm you and your allies, but you have the numbers and skills to eventually cut down the final tenacious foe.

As the harrowstorm fades, cheers and hearty congratulations ring out. Then those gathered begin to depart, leaving you with your companions.

Now that all is silent, you can look around. Ruins stand nearby, surrounding a tower. Among them, you see twisted features - skulls mounted on trees and sticks.

A glance at your adventuring companions shows that you're all in agreement on checking it out.

One of your companions recognizes the place. "So this is Briar Rock Ruins! A twisted place - I've only ever heard about it from those who ran in terror."

You turn to them, asking if they'll join you on a delve into danger. One by one they nod.

It's decided! You finish gathering up your spoils: a new weapon, potions, and several coins.

The Reach is yours to explore. Will you deal with the Hagraven threat in Briar Rock Ruins? Experience this and many more adventures in ESO: Markarth today!

You’ve faced the dangers of the #DarkHeartOfSkyrim and survived! But your adventure into Markarth isn’t over… and we’ve got some awesome prizes to give away for #TamrielTogether! Screenshot this Tweet as proof of completion then head here to enter:

Even as your companions draw their weapons and move toward the harrowstorm, your courage falters and you turn away guiltily.

Only fools willingly choose to fight the denizens of a harrowstorm.

The harrowstorm recedes into the distance and start to relax.

Unfortunately for you, that's when you run straight into a Hagraven and briarheart brute, who happened to also be in the area.

They make short work of you. It seems the Fates hate a coward.

This doesn't have to be the end of your adventure! Click below to return to the start of the journey and take a new path into the Reach. Thanks for playing!