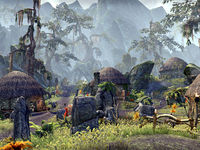 Stillrise Village was a Kothringi settlement located in the Shadowfen region of Black Marsh, in the swamps west of Stormhold.

Early in the village's history, its inhabitants worshipped the Daedric Prince Clavicus Vile in the Odious Chapel, a subterranean temple located adjacent to the settlement. Eventually Daedric worship fell out of favor among the Kothringi, and the people of Stillrise began to worship Aedric deities such as Z'en.[1]

In 2E 560 the Knahaten Flu broke out in Black Marsh, quickly decimating the Kothringi population. Initially, Stillrise Village was spared due to its relative isolation. However, a year later both of the village trader's apprentices contracted the flu during a supply run to Mud Tree Village. The plague rapidly tore through Stillrise's populace, and soon everyone was left either dead or dying. In a last-ditch effort to save their community, the village leaders pressured the chieftain to make a deal with their former patron, Clavicus Vile.[2][3]

The Daedric Prince obliged and granted the villagers immunity to the plague by condemning them to live as immortal skeletons, their souls contained in a soul gem array. The townspeople were horrified at their predicament, and the village shaman attempted to break the curse to no avail. Eventually, the villagers went back to their daily lives, using illusion magic to maintain their former appearances in the presence of outsiders. The warriors of the villagers grew to like their new-found immortality; for others, however, their desire to end the curse only increased as time went on. The villagers continued to interact with other nearby settlements during this time.

The village's charade persisted for two decades before attracting the attention of the Worm Cult in 2E 582, who sent a contingent of necromancers to steal the array containing the villager's souls in order to enslave them. While the cult initially succeeded in stealing the array, the villagers were able to repel the attackers and succeeded in trapping some members of the cult. Shortly after the attack, the Vestige came across the village and its plight. After the trapped cultists were killed and the soul gem array was recovered, the village leaders asked the Vestige to decide whether or not they should break the curse. Inside the Odious Chapel were two braziers: one of fire, one of ice; the fire brazier could destroy the soul gem array and kill the villagers, while the ice brazier would preserve the array, preventing it from being stolen again but prolonging the curse indefinitely. Infighting subsequently broke out, and it is unknown which choice was made.[4]