The UESPWiki – Your source for The Elder Scrolls since 1995
< Lore: Appendices(Redirected from Lore:Vestige (soul))
Jump to: navigation, search

The Soul also known as an animus is a feature of an entity, which seems to be closely connected to its animating consciousness and the body it has, both spiritual and physical. All living things on Nirn seem to have a soul, though the souls of more intelligent and stronger creatures tend to be "larger" (more powerful). Under ordinary circumstances, the mind and soul of a mortal are intertwined. The word, "soul", is almost exclusively used to describe Anuic animus that mortals posses [1], though other entities like Dragons and Daedra also have an animus that serves a similar function.

It is possible that souls are composed of various parts and influenced by variables that are yet to be understood, for example a Shadow of the soul can be separated from it and transformed into an independent entity, leaving original soul in a weakened state. Other anomalies of soul mechanics include the odd nature of Cadwell, who shared his consciousness between his old body and the one formed by his vestige, resulting in two distinct versions of the same person.

Daedra lack an Anuic animus, also known as a mortal soul,[1] each one instead possessing a Daedric soul known as a Vestige. When a Daedra is destroyed, either in Mundus or in Oblivion, its vestige is banished to the Void,[2] and attracted back to the plane of Oblivion where it originated. A Daedra reforms according to the pattern within its Morphotype (a concept which seems to be interchangeable with the vestige though it more closely relates to the form of a Daedra) using Chaotic Creatia (e.g. the Azure Plasm of Coldharbour).[1] A Daedric Prince can create a new Daedra by replacing an entity's original animus with a vestige.[3]

It is possible to trap the animus of a Daedra by magically infusing it into an item.[4] It is not known what happens to a Daedra killed in Aetherius,[5] though it has been suggested that this may be the one way to permanently kill a Daedra.[6]

While the precise nature of the souls is uncertain, what can be known is that souls are a source of mystic energy .[7] Soul Magic, Enchanting, Necromancy, Mysticism, and Conjuration all make use of this energy. Soul gems are the most common method of trapping souls, especially for enchanting, although items such as animus geodes can be used in some cases. 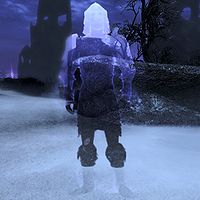 A soul within the Soul Cairn

Souls that have been bound through the use of magic can be used to enchant and charge magical items, animate undead or artificial constructs, or cast powerful destructive spells.[8] For this purpose, creatures' souls are usually trapped at the moment of death, and bound within naturally formed morpholiths known as soul gems.[9]

Soul Trapping is known to date back to at least the First Era, where techniques to bind a soul to an unhatched egg were practiced in Black Marsh before they were banned because the techniques were prone to error. After the Mages Guild was founded, the ban was lifted and the practice had resumed by 2E 864 [10] Soul-trapping spells and soul gems were standardized in the early centuries of the Mages Guild.[11] Soul gems come in many sizes, corresponding to the size of the soul that the gem can trap; the standard sizes are "minor", "petty", "lesser", "common", "greater", "grand" and "divine". Souls are also categorized into "black" souls, the souls of sapient races, and "white" souls, the souls of lesser creatures, although the distinction is arbitrary. The division was implemented in the early days of the Mages Guild at the behest of Vanus Galerion, in an effort to limit the practice of soul trapping.[11] It must be noted that blessings of Arkay and various ritual rites also seem to protect unwilling souls that would be classified as "black" from being trapped or manipulated, though it is not clear if this is the case in general or only with the souls of the dead who had gone through proper burial rites. [12]

By the Third Era, only white souls were being captured by the standard spells and gems of the Guild (as well as Azura's Star), and this practice was so thoroughly ingrained that most mages continued to avoid trapping black souls well after the Guild was disbanded.[13][14] Black soul gems could bypass this limitation and trap even the most willful of souls, though they were hard to acquire and required travel to various Daedric Planes. [15] Necromancers, led by the Order of the Black Worm, pioneered an easier way to create a black soul gem using the rituals of the Revenant. Although capable of storing black souls, the gems were dangerous to handle as small bits of the caster's soul could leak into the gem.[7]

When a mortal soul is used in the enchantment process, it is supposedly sent to the Soul Cairn for all eternity. A transaction between the Ideal Masters and willing necromancers can occur, in which case one can offer souls in exchange for power or armies of undead.[16] In at least a few cases, trapped souls have retained consciousness within a soul gem itself.[8][14][17]

Soul gems can seemingly capture essences other than an Anuic animus that a mortal posses, such as vestiges and other types of animi.

Soul Shriven are mortals who have had their souls taken by Molag Bal. Cultists devoted to him ritually sacrifice victims, who are pulled into Coldharbour, their souls stolen and replaced by a vestige at the moment of death.[8] This process leaves a soul shriven's mind and body intact, and in fact, immortal, regenerating after death as the Daedra do. It also reduces the willpower of the victim, allowing Molag Bal to enslave the soul shriven for eternity.[18] However, the process is imperfect, and over time both the mind and body of a soul shriven decay, resulting in a violent, feral, decrepit creature. Some soul shriven also claim to still feel a connection to their souls, believing that they can feel sensations that correspond to the treatment of the soul gems in which their souls are kept.[19]

It has been suggested that the soul shriven experience this effect because mortals require an Anuic principle to maintain their forms. In this case, there might exist "paragon" mortals with an additional Anuic aspect, who would retain their forms and sanity after becoming soul shriven, while still becoming immortal.[1] This hypothesis was confirmed during the Planemeld, during which some mortals became capable of fighting to defend Nirn even without a soul.[8]

Dragon souls are unique in that they generally persist eternally due to the link between a dragon's soul and its physical remains being far stronger than that of a mortal.[20] It is possible to use powerful soul magic to sever the connection between a dragon's soul and its physical remains, although effects of this is the subject of fierce scholarly debate, with some speculating that a dragon soul once severed may simply dissolve over time or return to join father Akatosh.[20] Dov (Dragons and Dragonborn) can absorb the souls of fellow dov.[21] This grants the recipient a portion of the knowledge and life essence of their fallen opponent, but it also destroys the dov permanently, rendering it beyond the ability of any ritual to resurrect.[22][23]