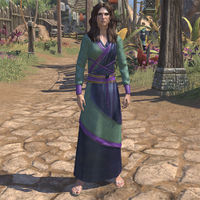 Domitia Nasica is an Imperial denizen of Hakoshae who has been suffering odd experiences during the night.

After receiving the quest from Ashur, approach the center of town and you'll hear the following:

The Magnate will send you to talk to Domitia about the Three Proofs. You'll find Domitia down by the river:

"Oh, you're that traveler I saw earlier. Do you need something"
The magnate has allowed me to join the festival, and said I should speak to you.
"Truly? That was certainly nice of her.
Your first step is to complete the Proof of Reverence. This trial allows us to call upon our ancestors to watch over us as we prove ourselves worthy of their name."
How do I do that?
"With this paper lotus. Write the names of your honored ancestors on its petals, and place the lotus in the river. This will allow it to float into the afterlife.
Think of it like a calling card. A way to get your ancestors to pay attention."
I'll place the paper lotus in the river.
"Return to me when you've completed your task.
Oh, and feel free to ask any questions you may have. This is Hakoshae's first Proving Festival in over a century, after all. I'm sure you're just as curious as everyone else."

Tell me more about the Proof of Reverence.

"Before we can prove ourselves to our ancestors, we must first get their attention.
The paper lotus acts as a ceremonial letter of sorts. By placing it into the river, we allow it to be carried into the realm of the dead."
Is that based on an Akaviri belief?

"Yes, it is.
The Akaviri believe that all waterways connect the realms of the living and dead. There are many folk tales about boats being lost in heavy fog, and landing on shores filled with restless spirits."
And do you believe that?
"I used to, when I was little. Whenever I would go jump in a puddle, my mother would yell, "Stop that! You'll fall right into the afterlife!"
Truthfully though, she just didn't want my dress to get muddy."

How do you feel about holding the Proving Festival after so long?

"Excited, of course!
Honestly, I'm shocked we gave up the tradition in the first place. No one even remembered the festival existed until the magnate found an old record about it."
If it's not a tradition, why did Hakoshae decide to have the festival now?
"Our town doesn't have much wealth or power, but we do take pride in our ancestry. Learning about our Akaviri culture and celebrating it is important to us.
And the Proving Festival is the perfect way to do just that."

When you've completed the trial:

"Through this Proof, you have shown reverence. Well done.
Next is the Proof of Strength. You'll need to... to... My, I'm sorry. I'm just so tired today. There's been a lot of strange noises at night lately, and I haven't slept very well."
Is that what you and the magnate were talking about?
"You overheard that? Ah, well, yes.
I've started hearing noises at night. Heavy breathing, uneven footsteps that seem to shuffle about. At first I thought I was dreaming it all. But now... now I'm not too sure."
Any idea what it might be?
"I don't, though the magnate has promised to send a patrol out tonight. Hopefully they'll find whatever it is.
But you've got a Proof to complete! Head over to Vek-Drassi for your next task. He's just a little ways west of here, right up the hill."
All right, I'll head to Vek-Drassi.
"Good luck with the Proof of Strength! And let me know if you need anything."

After the Magnate discovers her true past, in the town center, you'll hear:

If you return to the village at a later point, she will have returned to her place by the river. Domitia will hope they continue the festival tradition:

"It is my sincere hope that Hakoshae continues to celebrate the Proving Festival for many years to come. I've honestly never felt more connected to my ancestors."