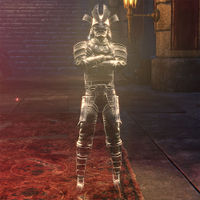 Proconsul Beloren-Kaie is an Akaviri spirit of a potential heir to the last Akaviri Potentate, Savirien-Chorak, who has been summoned from the afterlife by the Proving Festival to judge his descendant Magnate Feina-Darak. Before he reveals his identity, he will only be known as the Akaviri Spirit.

After you discover a letter in the Magnate's study confirming that she is a direct descendant of the Akaviri Potentate, Magnate Feina-Darak will confront you and Ashur. However, she will soon be interrupted by an angry spirit:

She will then be dragged through a portal. When you and Ashur enter the tombs, the spirit will appear to recognize the Morag Tong agent:

Akaviri Spirit : "Still you hunt me, assassin scum? Was my death not enough?"

After you slay the Shade of the Founder, you can enter the Founder Chamber where the spirit will deign to speak with you:

You can then talk with his to see why he is treating Feina-Darak in such a manner:

"Feina-Darak has called my spirit to judge her. By her quill my name was written, by her hands the paper lotus placed. And so I have come to punish her wickedness.
And yet you try to stop me. Who are you to deny me my revenge?"
Why do you crave revenge?
"When I escaped Cyrodiil, I had but one man to protect me. Someone I placed my utmost faith in, my utmost trust. Lieutenant Lein-Barduik.
But when it came time to guard me from my Morag Tong assassin, my protector fled."
So a Morag Tong assassin killed you?
"Yes, though not before I was able to inflict a mortal wound myself. Both I and my assassin died that day.
But not Lein-Barduik. He looted my corpse and claimed my name. It was he who founded Hakoshae, not I!"
But why abduct Magnate Feina-Darak? She didn't betray you.
"Her family continued to spread the lies of my betrayer. For centuries, they have proclaimed themselves nobility. But all they have inherited is lies.
She must renounce her title and tell her people the truth. Only then will I be content."
I'll relay the message to her.
"Go then, and convince Feina-Darak to speak the truth. Only that will save her."

You can then ask him about he managed to manifest:

What prompted your return?
"The Proving Festival is a time for the Akaviri people to commune with their ancestors. Not only does it allow the dead to view the living world, it also invites us to cross over.
Feina-Darak called me to judge her. I have come to do so."
But she didn't do anything. It was her ancestor who stole your identity.
"And so I did not kill her, as I attempted to kill Lein-Barduik when first this festival was held.
My lieutenant also summoned me by our ancient rites, though he did not realize this. I was compelled to cross over and judge his wicked ways."
But you weren't successful?
"Lein-Barduik was a strong mage in his own right. He cast me away.
For centuries I have waited for another Proving Festival, but I suspect that Lein-Barduik took precautions against my return. But now, at last, the truth can be revealed."

Convince Feina to tell the truth about her ancestry and the Proconsul will say:

Proconsul Beloren-Kaie : "I'll be watching, Feina-Darak. Waiting for you to speak the truth."
Magnate Feina-Darak : "I'll keep my word."

If you speak with him:

"I shall see if Feina-Darak honors her words. Only then can I rest."

After the Magnate discovers her true past, you will later see her in front of a crowd of citizens:

His spirit will then disappear.