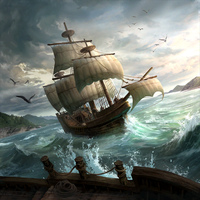 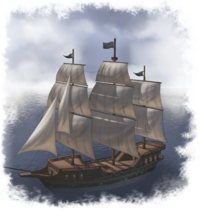 The most common deepwater vessel in Tamriel and Pyandonea is the galleon, a big ship with three masts and multiple rectangular sails. Galleons are used both for trade and military purposes. Altmer, Bretons, Imperials, Khajiit, Redguards, and Maormer all use and have used galleons as their principal warships.[1] Breton and Imperial galleons are especially widespread across Tamriel. The Imperial galleon has been built since the Second Empire until the present to protect maritime trade routes around Tamriel. Altmer and Maormer galleons are characterized by its bow figures; an eagle and a snake respectively.[2][3] The Renrijra Maor, a major group of Khajiit pirates and privateers, also use galleons.[4]

Swan ships are tall vessels with extensive sails, which can travel across both the sea and the rivers.[5] They are built only in the Summerset Isles, most of them in the wharves of Firsthold.[6] They are also the most favored type for fast travel within the archipelago and between Auridon and the mainland.[7] Smaller versions of these ships, with one mast, are common both in the Summerset Isles and its sphere of influence: Valenwood and Elsweyr.

Black Marsh's swampy terrain has forced the Argonians to favor travel through the numerous waterways of the region, only navigable by small-draft ships, which are and have always been the most common and the fastest form of transportation, both of people and goods, inside Argonia. Despite their heavy presence among the crews of big ships, they are rarely constructed by Argonians, as they use other races' ships to sail, commonly those of the Dunmer or the Imperial.[8] Argonian captains are famous as pirates, privateers and smugglers; and both coastal and inland port cities of Black Marsh have a long tradition of sea sailing.[9] This tradition was shared with the Kothringi, who were among the most valued sailors before they were wiped out by the Knahaten Flu.[10][11][12]

Bosmer do not build ships as they would require wood which they cannot use, as they follow the rules of the Green Pact. Due to this, most of the sea and river transportation in Valenwood is carried out by outsiders, most commonly Altmer and Imperials, varying its presence with the rise and falls of Empires and Dominions.[13][14] However, Bosmer sailors are common both in Valenwood and outside of the region, working in other races' ships.[15]

In High Rock, the heavy influence of the Second and Third Empire in the Breton population have heavily influenced the design of local Breton ships. Breton cogs, recognizable by having one mast, are also used both in sea and river trade across High Rock and beyond by Breton captains. Big hooded rafts are also used to sail the rivers of the region, transporting people and goods.

Dunmer ship architecture differs from the rest of Tamriel, developing a singular style. The Dark Elves build junk ships of many sizes, from three masts to one mast. Unlike others, their sails include several horizontal members, giving a bug-like appearance to the ships. Prows of Dunmer ships, both civil and war ones, commonly end with a hook-like spur. Dunmer junk ships of three masts are used as military vessels, comparable to other races' galleons. Two and one mast ships, however, are most commonly used in commerce and transportation of people both by sea or by the extensive rivers of mainland Morrowind. Big rafts with bug-like hoods are used to transport people and goods in short distances along the coasts or in the inner waterways.[16][17][18][19]

Imperials, especially those from the Gold Coast, have adventured into the seas since the very First Era.[20] Besides the galleon, the caravel fulfill the role of trade vessel, both for inner waterways, like the Niben Basin, and for the open sea.[21][22][23] Big rafts are used by the Imperials to sail the rivers of Cyrodiil, transporting people and goods.[19] In the Blackwood, in the vicinity of Black Marsh, drafts are used by locals to travel across the swampy terrain through its small waterways.

Pellitine Khajiit, unlike their northern Anequine cousins, have developed a local shipbuilding industry, this is due to its proximity to the Topal Bay and its traditional plantation economy, this produced a need for ships to handle the exportation of saltrice and other exotic products.[24] Since the mid-Second Era, the Renrijra Maor, are the principal group who run both piracy, privateering, and other seafaring activities based in Elsweyr. These pirates are infamous all across Tamriel for their effectiveness.[4]

Nords' shipbuilding and sailing history can be traced back to Ysgramor and even before, when groups of men came from Atmora to populate Tamriel.[25] Due to the relative isolation of the province and its unique climate and harsh folks, Nords' longships reflect their needs. The biggest sea ships have two masts and the smaller have one.[26][27][28][29] They are used both for trade and war and during the times Skyrim was independent, Nords' longships razed the coasts of Morrowind and High Rock.[1] Smaller rafts and boats are used to sail the waterways and lakes of Skyrim, however, their importance is smaller than their sea counterpart. Nords lack big ships which can be compared to other races' galleons.[28][29]

Like Nords, Redguards' seafaring history is long and most of Hammerfell's ships are unique in Tamriel, as the Yokudan designs were adopted by its descendants. The biggest ships are Galleons. These are the primary vessels used by merchants and as warships, as well as prison ships. Redguards also use smaller galleys, with both oars and sails, to allow travel with and without wind. These galleys, usually built with three masts, and are typically Merchant vessels. These ships are also characterized by their iconic bow figures, which represent Yokudan gods, and their painted hulls.[30] Besides the galleys, the Redguards also construct dhows, smaller ships, with one or two masts and triangular sails. These are, by far, the most common vessels in Hammerfell and they are used primarily in the transportation of both goods and people. Drafts are built for versatile uses, but their importance is smaller compared to moister regions, where river travel is more widespread.[31][32][30]

Like the other races, the Orcs have a history of sea faring. Orcish brigs are trading vessels used by the Orsimer and these vessels would go out as far as the Summerset Isles.[33] The Seamount Clan, were known for their seafairing, with stories claiming that their ancestors tamed killer whales in the Abecean Sea and trained them for war. Riders of those whales were said to be capable of harpooning ships and steer them by using the strength of the animal, with evidence of this long-lost tradition surviving in siege gear that was later recovered in the Second Era.[34] They were also described as the fiercest raiders of the sea before they settled on Betony.[35]

Ashlanders, Reachmen, and Anequine Khajiit have little or no tradition of seafaring and shipbuilding due to their landlocked locations and tribal society. They rely heavily on land transportation and the only ships they use are for fishing or very short travel.[citation needed]