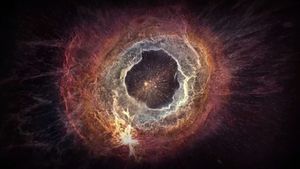 The Aurbis is the name given to the chaos, or totality, from which the cosmos was formed by Anu and Padomay. For all intents and purposes, it is the universe, encompassing the Void and all Planes of Existence from Oblivion and the lands of Aetherius to Mundus and the Outer Realms.[1]

Many sources describe the structure of the Aurbis as a wheel—Mundus is the hub, the empty spaces within it are the planes of Oblivion, the emptiness beyond it is the Void, and the rim encompasses the realms of Aetherius. The eight spokes connecting the rim to the hub represent the Eight Divines that played a major part in Creation.[2][3][4][UOL 1] These Eight Divines are also depicted as planets, orbiting Nirn and its moons at the center of the Aurbis.[5] The sun, Magnus, was created when the god Magnus fled Mundus to Aetherius, and the stars were formed by the Magna Ge who followed.[6]

The Alessian, perhaps Marukhati,[7] Arch-Prelate Fervidius Tharn describes the Aurbis as comprising "sheaths" within an overarching "integument". Through the intervention of the Magna Ge Mnemoli and a particular manipulation, called the "Hurling Disk", of the identity between the circle of the Aurbis and the Tower, the Arch-Prelate apparently believed that it would be possible to detach a sheath from the Aurbis' integument and "twist" it to provoke the Dragon Break of the Middle Dawn.[8] An Argonian source similarly mentions the existence of Aurbic "skeins" that can be "disjoined" by powerful mages.[9]

The adjective Aurbic is sometimes used to describe a type of magical force associated with the fundamental structure of the Aurbis.[10][11]