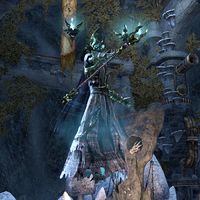 Caluurion is a Lich who serves as the third boss of Fang Lair. During the fight, he will activate the Wamasu, Serpent, Lurcher, Mammoth, and Shalk relics, which will give him varying boosts.

He has a chance to drop a sample of Dragon Bone. 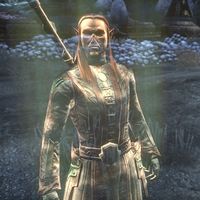 He was originally an Altmer and one of the adventurers who slew the dragon Thurvokun in the First Era, along with Ulfnor and Sabina Cedus. In undeath he has been bound to serve the necromancer Orryn the Black. Once he is defeated, his spirit will be freed and can be spoken to in later stages of the dungeon.

Activate Relic
Caluurion will activate a relic which will give him various abilities (?)
Necrotic Spear
Molten Breath

When he is approached he can be heard talking to Orryn the Black.

Orryn the Black: "Not to be an ungracious host, but I've tired of entertaining."
"Caluurion. See that our uninvited guests are made comfortable for a very long stay."
Caluurion: "How much more of your company must I endure, Orryn? None of you are welcome here!"
<When engaged in combat.>
"I'll banish every last trace of you from this world."
"Leave me to this empty existence!"

Activating and embracing the power of the Shalk Relic:

Caluurion: "The shalk glimpses the flame and sees only prey."

Caluurion: "Consume the fire or be consumed by it."
Caluurion: "The shalk leaves only cinders and bones in its wake."
Caluurion: "I will boil the marrow in your bones."
Caluurion: "Slough off your blackened flesh and show me your soul."

Activating and embracing the power of the Lurcher Relic:

Caluurion: "The lurcher takes its time to choke the life out of its prey. As do I."

Caluurion: "By the time you feel the creeping vines, it's too late."
Caluurion: "The lurcher embraces death every fall and rises anew. It will be no different for you."
Caluurion: "A lurcher's soul has a crushing grip on life. Can you feel how desperately it wants to take root?"
Caluurion: "I'll strip your desiccated corpse of its brittle bark soon."

Activating and embracing the power of the Mammoth Relic:

Caluurion: "The chill of the north lies deep in the bones of the mammoth."

Caluurion: "They say the north wind cuts right through you. Let's find out."
Caluurion: "Bodies caught in the Throat of the World never rot."
Caluurion: "Feel how the mammoth's cold heart still seeks to gore."
Caluurion: "Winter's beast beckons."

Activating and embracing the power of the Serpent Relic:

Caluurion: "Venomous serpents are the heralds of a slow and painful death."

Caluurion: "A flash of pain and the creeping dread of poison in your veins."
Caluurion: "Will you hear the scrape of their scales before they strike?"
Caluurion: "These serpents will swallow your soul."
Caluurion: "You may outrun the snake, but never the venom."

Activating and embracing the power of the Wamasu Relic:

Caluurion: "From the wamasu, I claimed thunder. Feel it course through you."

Conversation after being defeated:

Yisareh: "Caluurion! By your true name spoken, I compel you to rise once more and tell us of your captors."
Caluurion: "You are no friend to me, conjurer, but release those who walked with me in life and I will consider you an ally. Fail and we will have a very long time to become acquainted."
Yisareh: "That's an acceptable bargain."
Caluurion: "Then find Ulfnor and Sabina and dispatch them as you did me."

After defeating and freeing Ulfnor and Sabina, Yisareh will question the group about the dragon.

Yisareh: "That's it, the necromantic energies are exhausted. They should be free now."
Yisareh: "Caluurion, we've done as you have asked. Tell us of Orryn's plans."
Caluurion: "He seeks to take what we won at so steep a price, so long ago."
Sabina Cedus: "Thurvokun. The Dragon we hunted still lies dead in its roost."
Ulfnor: "By my hand, you'll recall. Not that any songs'll be sung about it."
Yisareh: "Tell me he doesn't have the Dragon's soul."
Caluurion: "Hmmph, no. I was unable to capture the Dragon's soul when we slew it. It's [sic] corporeal form was all I was able to claim. And this ruin."
Yisareh: "Small blessings … but even soulless Dragon bones pose a terrible threat in the hands of someone as powerful as Orryn. We have to stop his plans."
"Even as a soulless husk, the Dragon's bones hold formidable power. If Orryn's able to complete the reanimation...let's hurry."

Caluurion can then be further questioned:

"Those bones, this place, they are mine by right of conquest. Spoils paid for in blood. I devoted lifetimes of study to all of it.
For what? The damned beast held onto its secrets more tightly than its life!"
What were you hoping to gain?
"The others might claim an end to tyranny, but I lent my sorcery to their cause to claim the power of a god, or so near as to make no difference.
But that power could not be contained by the likes of me, so I had to content myself with the remnants."

Why did you become a lich?

"Because I could. Because even an Altmer's longevity was not enough to find what I was seeking.
You can put that on my grave: here lies Caluurion, whose reach forever exceeded his grasp."

At one point he will be called upon to break a door's magical seal:

Yisareh: "It's like it's drawing its power from beyond the veil. Caluurion, can you help?"
Caluurion: "If I must."
<Caluurion breaks the seal.>

He can assist Yisareh when called during the battle against Orryn:

Yisareh: "I think it's time we laid these old bones to rest for good."
"Caluurion, Ulfnor, Sabina, help me unravel the threads binding Orryn to your ancient foe."
Caluurion: "Turnabout is fair play."
Ulfnor: "Oh, I'm going to enjoy this."
Sabina Cedus: "Time for a taste of your own medicine, bastard."
<Orryn's ghost appears.>
Orryn the Black: "Where did I go wrong?"
Sabina Cedus: "There'll be plenty of time for regrets where you're going."
Yisareh: "Now to ensure this Dragon stays buried for a very long time."
<Starts the ritual>
Yisareh: "Breath of the Tricky God. Breeze of the Far Shores. Carry away the lingering life that clings as Sep's skin to this world."
Caluurion: "May your elusive spirit be forever swallowed by the Void."

Caluurion can be spoken to for a final time after this. He isn't that happy that the focus of his life's work was destroyed and he doesn't want your pity.

"All my works and accomplishments finally reduced to dust and lost to time. I hope whatever comes after this life is not so pointless."
I hope you can find rest now.
"Is that to be my reward for accepting the inevitability of fate and surrendering to futility? Insipid and eternal languor? Save your pity and your dreams of idyllic repose for your own pointless existence."