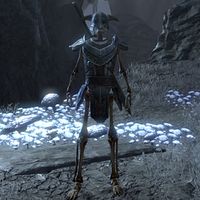 Ulfnor in his skeleton form

Ulfnor is a Skeleton found in Fang Lair. He is the fourth boss of the dungeon, and is assisted by Sabina Cedus during battle.

He has a chance to drop a sample of Dragon Bone. 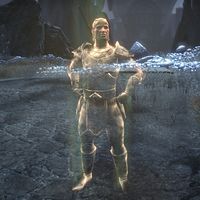 Ulfnor's Nord spirit after being freed

He was originally a Nord adventurer who slew the dragon Thurvokun in the First Era, along with Caluurion and Sabina. In undeath, he has been bound to serve the necromancer Orryn the Black, and after being defeated his spirit can be spoken to throughout the dungeon.

As a boss type creature, Ulfnor is immune to all crowd control type effects.

Cleave
The boss swings its sword around dealing moderate physical damage in a cone in front of it.
Uppercut
The boss swings its sword upward dealing massive physical damage. This must be blocked by the tank or dodged by all other group members.
Fire Bloom
The boss releases flame along the ground towards players as indicated by red circles.
Draconic Smash
The boss lights its sword on fire and swings it, releasing 3 flaming whirlwinds out from itself as indicated by red circles.
Flaming Whirlwind
These whirlwinds deal high flame damage over time and must be blocked or dodged if possible.
Engulfing Flames
The boss breathes fire dealing moderate flame damage over time to all targets in front of itself.

Execute(?)
Once a player is pulled by Sabina Cedus' Spectral Chains, Ulfnor will slowly walk over to them. If the player is not freed in time, Ulfnor will stab that player resulting in a one hit kill.

Conversation while he is being summoned:

Orryn the Black: "So many of the things you've broken I can easily replace, but Caluurion … he was a unique specimen. He'll never be the same.
Orryn the Black: "And what are these two without the third? Incomplete. Ancillary. Superfluous.
Orryn the Black: "Ulfnor. Sabina. Smash yourselves to dust against these vandals."
Ulfnor: "Sorry to have to kill you."
Sabina Cedus: "No you're not."
Ulfnor: "Has to be done. Might as well enjoy it."

During the fight against Orryn the Black and Thurvokun, when Ulfnor protects you from the ghost wall mechanic:

"Watch them dash like waves against me!"
"A few more off to the Void! Who's keeping tally?"
"It's kind of fun, the way they pop."

Once Sabina and Ulfnor are defeated, the following conversation occurs:

Yisareh: "That's it, the necromantic energies are exhausted. They should be free now."
"Caluurion, we've done as you asked. Tell us of Orryn's plans."
Caluurion: "He seeks to take what we won at so steep a price, so long ago."
Sabina Cedus: "Thurvokun. The Dragon we hunted still lies dead in its roost."
Ulfnor: "By my hand, you'll recall. Not that any songs'll be sung about it."
Yisareh: "Tell me he doesn't have the Dragon's soul."
Caluurion: "Hmph, no. I was unable to capture the Dragon's soul when we slew it. It's corporeal form was all I was able to claim. And this ruin."
Yisareh: "Small blessings... but even soulless Dragon bones pose a terrible threat in the hands of someone as powerful as Orryn. We have to stop his plans."

Ulfnor can then be questioned:

"Ugh, thank you. Glad to be free of those aching bones. Gone stiff in my old age.
My place is in Sovngarde. Don't let these ash eaters keep me like some trophy."
How did you wind up like that?
"Bastard, Orryn, thought he might learn more about the Dragon from us. Ordered Caluurion to dig up our graves and call our spirits back to this world. Of course, once he had us he had no intention of letting go."
Anything you could tell me about the Dragon that would be of help?
"The flesh and blood thing was a monster of god-like power, so count yourself lucky that it might only be the bones left to trouble you. Aside from that, I've nothing of use to you.
Orryn though, not real well liked by his thralls."
You think I could turn them against him?
"You, hah, no. Her though, maybe.
Loosen his grasp on the undead in his service and they'll welcome the opportunity to squeeze his beating heart still."
Thanks for the tip.

At one point Yisareh will need more help to break a door's magical seal:

Yisareh: "We'll need to destroy this crystal before I can dispel the barrier seal."
Yisareh: "This seal is like the last one. I'll need help to break it."
Ulfnor: "This one's mine! Nothing can stop Ulfnor the Dragonslayer!"
<Ulfor barges the door and breaks the seal.>

Yisareh: "I think it's time we laid these old bones to rest for good.
Caluurion, Ulfnor, Sabina, help me unravel the threads binding Orryn to your ancient foe."
Caluurion: "Turnabout is fair play."
Ulfnor: "Oh, I'm going to enjoy this."
Sabina Cedus: "Time for a taste of your own medicine, bastard."
Orryn the Black: "Where did I go wrong?"
Sabina Cedus: "There'll be plenty of time for regrets where you're going."
Orryn the Black: "Now to ensure this Dragon stays buried for a very long time.
Breath of the Tricky God. Breeze of the Far Shores. Carry away the lingering life that clings as Sep's skin to this world.
May your elusive spirit be forever swallowed by the Void."

After the ritual/quest is complete:

"Not bad. Not so impressive as killing it the first time, but not bad. I'll make a toast to you when I tell my tale in the Hall of Valor.
Were Dragons really so fearsome?
"Vain and terrible monsters who only stayed their wrath in exchange for total obedience and devotion. Not unlike a Daedric Prince, come to think, but in the flesh.
I can almost forgive the Dragon Priests for bending knee. Almost."
Did Thurvokun have a cult?
"Before the Dragon War. Though I never lived long enough to find out what became of them. Damn beast got the last laugh when it crushed Sabina and me in its death throws.
Shame, I would have liked to have split the skulls of those scale-lickers."
(If you've already completed Scalecaller Peak) Fate didn't smile on them. I saw what happened to Thurvokun's Dragon Priest at Scalecaller Peak.
"Good. My kin have tales of their lives under the Dragon Priest's rule going back generations. The only ones that will rouse your spirits are the ones about when we finally dragged the scaled tyrants from the sky and buried them in the Dragon War."
Was the Dragon War when you slew Thurvokun?
"Hah! No. This reclusive lizard's hideaway kept it safe through that and all the hunts to come. Didn't find Fang Lair until well after Emperor Reman stopped making sport of their kind, but never forget it was Nords that started the tradition!"
I'm sure you did your ancestors proud. I'll raise a glass to your memory.