The UESPWiki – Your source for The Elder Scrolls since 1995
< Lore: People: C
Jump to: navigation, search
"I know you. I saw you through the Soul Shriven's eyes. You were with the fool who thinks himself the shining knight of Cyrod. If only he knew what a monster I was. The horrors of Coldharbour pale before my heinous deeds!"
—Cadwell the Betrayer

Sir Cadwell , also known as Cadwell the Betrayer, Hero of Cyrod, The Villain of Elsweyr, and Champion of the Third Nedic Massacre. In life he was a cruel, power hungry man who claimed the horrors of Coldharbour pale in comparison to his heinous deeds.[1] He helped Khunzar-ri and his kra'jun seal the dragons away in the Halls of Colossus only to betray him in an attempt to take the power sealed away in Jode's Core. He died at a last stand in the Shadow Dance Temple during the Merethic Era, according to Cadwell the Soulshriven his head was "quite unceremoniously" separated from his body via decapitation.[2] His remains were scattered across the land and his name wiped from all records.[3][4] 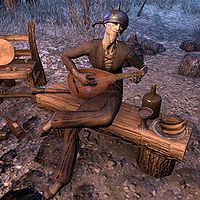 Upon death his soul was sent to Coldharbour where he ended up as a soul shriven, being an insane man in life before arriving in Coldharbour is credited as being the reason for him not ending up a feral soul shriven.[5] Cadwell the Soul Shriven's personality is the opposite of the one he had in life and even Cadwell was unsure of why that is. He theorized it had to do with either the transition to life to death, becoming a soul shriven, or his many years spent in Coldharbour.[2]

In his many years living in Coldharbour, Cadwell has since discovered all the nooks, crannies, secret paths, and hidden locations the realm has to offer. His extensive knowledge of Coldharbour along with his unique ability with portals makes him nigh impossible to hold captive, and the Daedra gave up on trying to keep him in chains long ago. During the Planemeld, he assisted the Vestige and Lyris Titanborn in escaping from the Wailing Prison and once again helping them rescue Abnur Tharn from the Castle of the Worm, perhaps even coming back with them to the Harborage in Tamriel. Throughout the joint Mages Guild and Fighters Guild coalition's invasion of Coldharbour, Cadwell assisted in guiding rescued persons back to the Hollow City. He also helped Vanus Galerion destroy the Great Shackle and joined in on Meridia's confrontation against Molag Bal in the Planar Vortex. Following Molag Bal's defeat, Cadwell became a servant of Meridia and granted the Vestige the opportunity to visit the territories of the Alliances they weren't a part of.[6]

Cadwell is able open up portals to anywhere he was needed or he wanted to go.[2][6] When Cadwell the Betrayer realigned the moons he had to bind himself to the Lunar Lattice. [7] It was theorized by Khamira, that Cadwell got this unique ability from this connection to the Lunar Lattice. [8] This theory was later proven to be correct as Khamira being bound to the Lattice like Cadwell was able to do it herself.[9] Cadwell was able to master the ability of portal creation after thousands of years of existence within Coldharbour. Something Kamira herself said she might need in order to master it herself. [8]

This Lore-related article is a stub. You can help by expanding it.
Retrieved from "https://en.uesp.net/w/index.php?title=Lore:Cadwell&oldid=2339552"
Categories:
Hidden categories: