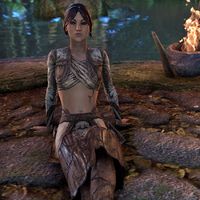 Girnalin is a Bosmer spinner and priest who can be found in Elden Root.

Speaking with Girnalin, she begins with: "I speak, and through me sings Y'ffre. My tales are echoes and echoes of songs He once sang, of threads woven by his throat into tapestries ingrained in the minds of we faithful. The calls of birds, twinkles of stars, and lap of the sea live within me.

What stories do you tell, then?
"I do not spin in terms of "whats" but rather in "whens." The Now of the songs that fill me consider the seas and skies, and that sea and sky beyond those of Mundus—Aetherius.
So I may speak of any of these concerns—for now."

Tell me a story about the seas.

"Y'ffre taught the birds to sing and the waves to lap against the beach. Through Y'ffre's song, he also gained sight-perception of all that occurs within the sight of birds and the reflection of waters, and he echoes their songs and crashing waves."
Is there anything he doesn't hear or see?
"Of course. He sees and hears nothing, for Y'ffre is now the Earth-Bones, the frame upon which Nature is laid and woven. His sight-perception and song-echo instead are loomed through his bones and woven into tapestries of song for we mortals to study."
How does this relate to the sea?
"The Sea is all-enclosing, the water that encircles all of Mundus. The birds call out that which occurs over land to the sea, which reflects and echoes that song.
Through study of the Sea's mystery it is possible to interpret Y'ffre's song-tapestry."
How would I do that?
"You already do, as do all mortals. Your frame of perception of the world is your own Bones, akin to the Earth-Bones. It is as possible to see into your own future and world as it is to immerse the Self in hysteria with no fear."
What does that mean?
"To sing a law, and then Speak into the heart of that law, convincing it of a subtle error and how it must change its own Self.
That is how Nature's course—its own Sea—is shaped and reshaped over time. Such changes can affect the whole of Mundus."

What stories can you tell me about the skies?

"The sky mirrors the sea, and the sea also reflects its mirror. Day, night, and the places between are the realm of the sky, as Y'ffre interpreted the time-law Anui-el established within Nirn.
Thus, the sky bridges time and nature, and measures both."
What does that mean?
"Within each half of the sphere of reflection lies half of the potentialities of Nirn's way in any given moment. Each instant is a sea-state or a sky-state. Each individual sees one or its other as weal or woe, and each moment can be turned on its side."
What does turning a moment on its side achieve?
"Each moment so turned becomes an island in your path. For example, the Dwemer, united, had their way in Dwemeris.
But one clan—Rourken, the wayward clan—struck anchor and sailed across the sky. Why do this? Mired in a sea, they sought the sky."
Creating an island is a good thing?
"Yes. Change is wrought in Nirn in six ways, and the turning of islands is one of these, often described by others in other terms.
Of course, it is possible to acknowledge these ways without understanding them—to spin them is all I can do."

I want to hear a story about Aetherius.

"Aetherius is the sea of light, the Immortal Plane, the origin of magic. Y'ffre sings not of Aetherius, but to it, weaving a song so beautiful that stars were compelled to dance and sway.
They still wink and blink in memory of that song."
How do stars relate to Aetherius?
"They are Aetherius. Rather, the sun and stars are holes pierced in the wall of night by Magnus—and other spirits—seeking to escape Nirn.
These holes permit Aetherius' light to enter our world. From theirs to ours does Magicka trickle."
How do they twinkle and move across the sky, then?
"Well, consider this. As Oblivion is a realm composed of realms, so, too, is Aetherius a bright sea with many realms within.
Each of these stars is a window into these realms, and as these realms move, so too do they move. Or close, like doors."
What realms do you mean?
"Now, that is an enormous question that I cannot answer. Many souls of mortals become spirits of another sort in that place—and that is all I can say with any certainty. As difficult as it is to travel to Oblivion, it is far more to go to Aetherius."