The UESPWiki – Your source for The Elder Scrolls since 1995
< Lore: People: I
Jump to: navigation, search

Iszara was a Redguard leader of the late Second Era who, along with her brother Cyrus, was instrumental in the rebellion of Stros M'Kai against the Imperial occupation. She became the city's ruler, guided by the spirit of her secret lover, Prince A'tor. In this position, she ordered the rebuilding of the city and likely had some part in organizing the First Treaty of Stros M'Kai.

Iszara grew up in Sentinel and was likely born there, several years before her younger brother Cyrus in 2E 831. Her father was a famous comedic playwright and a loyal Crown, a faction she embraced more readily than Cyrus. While watching one of her father's plays, she first noticed the male lead, a Forebear actor named Hakan. At the onset of the Tiber Wars in 2E 852, amidst the threat of civil war between Crowns and Forebears, she married Hakan. Although neither of them were from noble families, a marriage between Crown and Forebear eased tensions in Sentinel for a while.[1]

She moved to Hakan's estate in the city's merchant quarter, where Cyrus was still able to visit. Hakan was not at home very often, as he was training with the Forebear militia for the inevitable civil war to come. He also taught Cyrus sword fighting techniques, and his influence made Cyrus question his family's loyalty to the Crowns. Iszara's father, hoping to unite Hammerfell's two political factions, wrote a noble play about the shared history of their predecessors, the Ra Gada and the Na-Totambu. The play was a huge success and managed to abate the civil war for several years. Hakan, however, was furious at his father-in-law for causing the militia to disband. During a night of celebration, Hakan drunkenly confronted him, and struck Iszara when she tried to intervene. Cyrus came to his sister's defense, and dueled Hakan to the death. She could not forgive him and he fled to become a mercenary; they would not see each other for the next ten years.[1]

Sometime before the Battle of Hunding Bay in 2E 864, she began seeing in secret Prince A'tor,[2] who became the leader of the Crowns after Thassad II's death. The king's death ignited the civil war which would last for two years, forcing A'tor and Iszara to flee to Stros M'Kai.[3] There, she joined the Restless League, a rebel organization with allegiance to the Crowns. When war finally came to Stros M'Kai, she stayed back with the League while the Empire destroyed the remnants of the Crown army, including the prince's flagship. Before the prince physically died of his wounds, his wizard, Archmage Voa, was able to put his soul in a soul gem. The few remaining Crowns managed to bring his body ashore and hide it in the Temple of Arkay. The Restless League somehow obtained the soul gem, which they hoped to use to restore Prince A'tor. 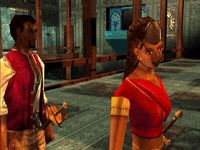 Iszara as ruler of Stros M'Kai

Iszara grew impatient and decided to steal the gem and leave their hideout to find help in Stros M'Kai.[4] One of the mages at the Mages Guild, Joto, helped her research the soul gem's magic. With a priest of Arkay, Brother Kithral, she looked for Voa's ring, which could unseal the stasis field on A'tor's body.[5] She also searched for a piece of malachite, which she obtained at the local smugglers den.[6] Joto did not have the required knowledge to use the soul gem, and knew of only one who did: N'Gasta, the Sload necromancer. He warned Iszara not to go there without the Flask of Lillandril, so they searched for the flask for some time. Again, she grew impatient and traveled to the Isle of N'Gasta without it.[7] N'Gasta tricked her into trading her soul for his services, and he offered her soul to Clavicus Vile.

Three months later, Cyrus' old mercenary friend Tobias was in Stros M'Kai on merchant business and learned of her disappearance. Tobias sent a letter to Cyrus with the news, which he could not ignore. Determined to find his sister, he learned of all that had happened up until she left to see N'Gasta. Cyrus defeated N'Gasta and bargained with Clavicus Vile for Iszara's soul. Restored to her body again, she returned to the League hideout with Cyrus. He explained how N'Gasta had him deliver the soul gem, disguised as an amulet, to Stros M'Kai's provisional governor, Lord Richton. On his own, he recovered the gem from the palace's treasure vaults, which were to be Iszara's jewelry chambers before the Imperial occupation. Iszara infiltrated Stros M'Kai with the League after Cyrus had the means to restore the prince. The ritual caused A'tor's soul to enter his sword rather than his body, however, becoming the Soul Sword.[8]

Iszara fought with the League in the battle that followed, so that Cyrus could safely enter the palace and kill Richton. With the governor overthrown, Queen-Regent Iszara[UOL 1] ruled Stros M'Kai and had possession of the Soul Sword from then on. She ordered the rebuilding of the Old Quarter that had been destroyed in the Battle of Hunding Bay, and later negotiated the First Treaty of Stros M'Kai, a peace treaty between the Empire and Hammerfell that was more favorable to the Redguards.[8][UOL 1]