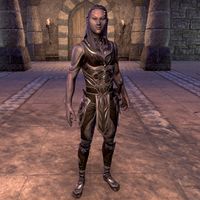 A Demiprince (sometimes spelled Demi-Prince[1]) is the Daedric offspring of a Daedric Prince or Daedra Lord and a lesser entity such as a mortal. Although they often inherit aspects of their princely parent, they are notably eccentric and can be lacking in characteristics such as foresight, memory, cruelty, or willfulness. Some acquire, or are given, minor realms of Oblivion to rule, although many of these pocket realities are bizarre even by the standards of Oblivion. Some demiprinces are known to visit Mundus for the express purpose of interacting with mortals, an act usually abhorred by regular Daedra.[2]