The Daedric Prince Sheogorath appeared at my alliance's camp in Cyrodiil, promising to show me how to make war more exciting.

You have a special visitor

It would be difficult to miss the presence of any Daedric Prince, but Sheogorath is particularly good at attracting attention. Standing at one of the alliance gates in Cyrodiil, he can be found next to a mock-up of a soldier made from produce. He greets you like an old friend, giving assurances that the only person who can see him is yourself. He seems bored by the events unfolding around him, and offers to spice things up a little bit with his own influence. More specifically, he offers you the chance to wield another Prince's artifact: the hammer called Volendrung.

Step through the portal behind the Mad God and you will be transported to his realm of Cheesemonger's Hollow. There you will be given basic instructions on how to use the artifact in combat, and finally given the opportunity to wield it yourself. You are now presented with a series of challenges to familiarize yourself with the weapon. 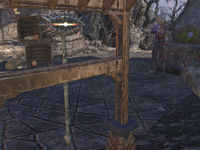 First you will make your way down the stairs to a Heavy Xivkyn Dummy, which will serve as the target for learning the first ability of the artifact: a wide swing called Rourken's Rebuke. Take out the dummy and move on to your next objective. Your second target will be a Light Xivkyn Dummy, on which you will use the second ability: Malacath's Vengeance, a hard overhand blow to a single target. Demonstrate your prowess further by taking out a second Light Xivkyn Dummy before moving on to the final objective.

At the very bottom of the Hollow, you will be directed to take action against a group of people dancing away obliviously. You are asked to test the third ability of the hammer: Accursed Charge, an ability that launches you at an opponent for a swift attack. Once Sheogorath has seen that you can use all three of the standard attacks, you are requested to keep fighting against an infinite source of opponents until the ultimate ability of Volendrung is ready: Ruinous Cyclone, a devastating area attack that pulls in every enemy around you and deals unbelievable amounts of damage.

Now that you have made it obvious to Sheogorath that you can handle the artifact, at least to some degree, he asks that you return the weapon to its rack and listen to some final words of wisdom. He warns that using the weapon means forfeiting your soul, and if you pick up the weapon in Cyrodiil you are stuck with it. Agree to his terms and collect your reward, exiting through the portal behind you when you are ready.