The UESPWiki – Your source for The Elder Scrolls since 1995
< Lore: People: G
Jump to: navigation, search
"From the wild came a Bosmer unlike any other. Her eyes were of fire, hair of wind and rain, and all who gazed upon her quaked in fear. All except the Silvenar."
—A Tale Forever Told 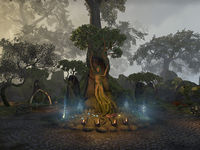 Treehenge, the resting place of the Green Ladies 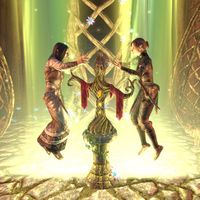 The Green Lady is one of the two spiritual leaders of the Bosmeri people, also known as the Hunter, the Protector, the Vengeance of the Green,[1] and Her Verdant Highness.[2] Her existence as the embodiment of the primal ferocity, health, strength, and physicality of the Bosmer is comparable to that of a demigod.[3] The Green Lady and the Silvenar are profoundly linked in both story and reality, and there must always be a pair. When one perishes, the other will soon follow.[4]

After the death of the previous Green Lady and Silvenar, the Spinners of Valenwood will typically reveal the next person to carry on the role. A potential Green Lady will often display indications of such, even before their predecessor dies through near-supernatural feats.[5] As opposed to the Silvenar, the potential to be the Green Lady seems to be something that can be passed down. An above-average number of Green Ladies have been born within the village of Deepwoods[6] and there have even been multiple Green Ladies from within the same family, although this is decidedly uncommon.[7]

As the Green Lady and Silvenar are a constant in the Valenwood, it is difficult to determine who, if anyone, was the first. According to the Green Lady, her memories stretch back to 'the formless times'.[1] One folktale regarding the Eldest, an ancient strangler that is one of the first of Y'ffre's creations, states that the first pilgrims ever to have visited it were an elderly, childless couple. They tended to the Eldest and, in turn, were granted the roles of Green Lady and Silvenar as thanks.[8]

Whoever the original individual might be, that fact is ultimately unimportant for Bosmer. The Green Lady exists as a story first and foremost, and their beginning is a tale forever told. Within the story, Silvenar begins their existence as a being who can see all aspects of Valenwood, yet is heartbroken and left empty by the wildness of it all. They then meet the Green Lady, the embodiment of the wild nature of the Bosmer. The Green Lady attacks the Silvenar but the Silvenar does not fight back. Instead, they show her the beauty of the Green. As The Green Lady comes to see the beauty of Valenwood as the Silvenar does, the Silvenar's emptiness is filled by her passion for her people. The two of them become bound to another, taming the wilds and empowering the forest.[9]

This story, though nominally their origin, is one that is repeated constantly across Valenwood's history. it reflects their beginning, their now, and even their future.[10] Each time a Green Lady dies a new one is found, and she will inevitably be bound to the new Silvenar and once more tame the wilds. This is typically done in a special ceremony known as a Handfasting that takes place in the city of Silvenar.[11] As such, there is no true beginning or end to the story of the Green Lady, only interludes.[1]

Once the Silvenar dies, their union is broken and the Green Lady's bestial nature is irrevocably unleashed. Her fury is then turned upon all those involved until she joins him in death. One example of this was seen circa 2E 582, when the Green Lady Finoriell swam all the way to Pyandonea to seek vengeance for the murder of her Silvenar.[4] After she too inevitably falls, the former Green Lady's spirit will return to the ancient grove of Treehenge. Here, they transition from being a Green Lady into being a Matron, rooting themselves in place and becoming a part of the Green so that the memories of the Green Lady are preserved. In doing so, they will also leave the power of the Green Lady behind for the next person to begin the story.[14] Once again, the next Green Lady will take the force in and be revealed by the Spinners, wed to the Silvenar, and continue on the cycle until her own death.[1]

Circa 2E 582, the Silvenar Edhelorn was assassinated by local Maormer during a diplomatic visit to the small island of Khenarthi's Roost on behalf of the Aldmeri Dominion. Unwilling to die without extracting vengeance upon her husband's killers, the Green Lady Finoriell swam the whole way to the southern island of Pyandonea and killed the Maormer indiscriminately until her death.[4] Her niece Gwaering replaced her as the next Green Lady.[5]

Later that year, Gwaering's jealous ex-lover Ulthorn was manipulated by the Daedric Prince Hircine into attempting to usurp the Silvenar's position by taking part in the Handfasting ceremony in his stead. Taking on the moniker of "the Hound", Ulthorn and his forces captured the city of Silvenar and put Gwaering under Hircine's sway.[16] Ulthorn speculated that the reason Hircine wished for him to usurp the Silvenar was that the Green Lady could be seen as the ultimate prey, being the strongest of the Bosmer, the greatest hunters of Nirn.[17] The city was retaken when Ulthorn was defeated by the Vestige and the new Silvenar, Indaenir. Gwaering was subsequently rescued and performed the Handfasting ceremony with Indaenir.[16]

Treehenge was also invaded that year by Worm Cultists who sought to capture the spirits of the previous Green Ladies. The Vestige defeated the cultists and saved their souls, allowing the soul of Finoriell to finally become rooted and join her sisters in the grove.[4]