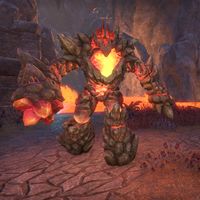 Iron Atronachs (sometimes called Earth Atronachs[1]) are a type of Elemental Daedra.[2] They are towering behemoths composed of solid and molten iron and usually take a roughly humanoid form.[3] Iron Atronachs come from an unnamed volcanic realm of Oblivion, an impossibly dense molten hellscape that produces them in abundance.[4] Iron Atronach names usually appear with the Daedric clan name "Mynar".[3]

Iron Atronachs have a relentless appetite for destruction[4] and are often found in the Deadlands, the volcanic realm of Mehrunes Dagon, the Prince of Destruction.[3] They attack using their brute strength and the molten heat of their bodies.[3][5] Some Iron Atronachs possess a magical aura that damages anyone who dares to get too close . Electricity-based spells do not damage Iron Atronachs, but heal them instead. They can be harmed by any type of weapon.[6]

Few mortal conjurers dare to summon Iron Atronachs to Tamriel, despite them making powerful servants.[4] Those that do sometimes end up dead.[7] Some mages, not satisfied with simply summoning Iron Atronachs, weave powerful Illusion spells to assume the shape of an Iron Atronach.[8] The Undaunted were known to use Iron Atronach-styled weapons and armor.[9]

Sufficiently powerful mages can bend summoned Iron Atronachs into the form of mounts. The magic-wielding knights of Zenithar's Crucible are known to charge into battle atop Iron Atronach Horses; it is said no force can stand against such a charge.[10] The first Iron Atronach Senche was summoned by Maalanrie Direnni of Clan Direnni when she was restrained by bandits.[11] The mage Tarvyn Othren was the first to summon an Iron Atronach Guar, which resulted in the deaths of his companions.[7]

Aer, the Conjurer Magnificent, summoned the first Iron Atronach Bear in 1E 2150; the calling-ritual for summoning Iron Bears is known to be far easier than most, due to the lumbering form of a bear perfectly matching the temperament of an Iron Atronach.[12] The famous Redguard conjurer Rozaba af-Nizhadal, was known to ride Iron Atronach Camels across the deserts of Hammerfell. She referred to these creatures as "glass-treaders", as the atronach's scorching feet left behind glass tracks wherever she rode.[13]

Only the strongest mages can bend an Iron Atronach into a lupine form; Iron Atronach Wolves are the most difficult form to summon, as the solitary atronachs despise the pack reliance of wolves.[14]

Some Iron Atronachs are actually not Daedra at all, but a type of golem which have been artificially constructed and animated by magic.[18] These can be compared to Iron Golems, a similar type of construct.[19]