The UESPWiki – Your source for The Elder Scrolls since 1995
< Lore: Bestiary: W
Jump to: navigation, search 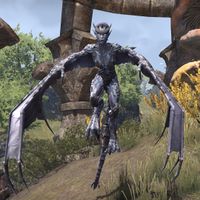 Winged Twilights are intelligent winged Daedra with claw-like limbs, black horns, and spiked tails. They can have blue or purple skin, and their eyes can be red or blue.[1][2] Their bodies dappled with scales. They are known to operate as messengers of Azura.[3] In appearance they have a beautiful feminine form similar to that of Harpies with bat-like wings, though the feminine aspects of the winged twilights are more "ravishing", and their long, sharp, hooked tails are immeasurably more deadly.[3] When working together, they follow a matriarch.[4]

Winged twilights are resistant to fire, frost, poison, and shock and can reflect spells.[5] Winged twilights are not short on cunning; they stalk their prey, waiting for an opportunity to take it down with their swift strikes. They swing their barbed tails to injure their foes while airborn.[6] Some winged twilights wield shock spells in battle.[7] They can also shriek at their prey to incapacitate it. Their screams are deafening, and those caught in front of a winged twilight as it shrieks will become stunned and confused. Their talons are used to tear flesh, as well as grip rocks, branches and other vantage points.[6]

Void Salts, ichor, and membranes are reagents that can be collected from their corporeal remains.[5][8] Ichor extracted from a winged twilight smells similar to eucalyptus or mint and can be used to brew potions of levitation.[9] The long, extremely sharp hooks on the tips of their wings can be used to concoct potent poisons.[6] When conjured by mortals, winged twilights can be ordered to heal their summoner.[10]

Though typically found in the employ of Azura, they also serve of other Daedric Princes, such as Mehrunes Dagon,[11] Molag Bal,[12] and Nocturnal.[13] They occasionally ensorcell and deceive mortals, sometimes under the guise of serving a more trustworthy Prince.[14] Some winged twilights become infatuated with mortals and abduct them, holding them hostage until they return their affections.[4][15] They may be lascivious[16] and insistent[17] towards their captives. One particular instance of winged twilights abducting mortals involved a nest at Esutanamus in 2E 582. A winged twilight matriarch kidnapped a young adult, and whenever the young mer tried to leave, the Daedra swooped down onto his head, tussled his hair with their claws and pushed him back into the ruins, cooing as they herded him back into their lair.[18][19]

Molag Grunda is a winged twilight who is acknowledged as the daughter of Molag Bal.[20][21]