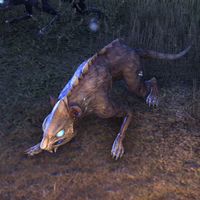 "The simple depravity of the Daedrat is admirable, in its own way."[1]

Daedrats are Daedric vermin from Oblivion resembling large, ragged rats with glowing blue eyes,[2] that sometimes sneak into Nirn through Oblivion Gates or portals.[UOL 1] Some Dremora consider them cute despite the fact that Daedrats are considered vermin,[1][3] so if they catch them they kill them swiftly instead of torturing them, like they do with loose banekin.[UOL 1] They are fed on by some vampires, such as the Bloodmist Clan.[1] Their meat is largely gristle, and highly enjoyed by ogrim when rancid,[4][5] but is known to upset dogs' stomachs in even a fresh state.[6]

Daedrats, as many Daedra, can vary in appearance depending on their plane of origin. Daedrats that originate from Coldharbour are scruffy creatures with exposed spines and skulls, blue fur and cold blue eyes.[2] Jackdaw Daedrats are bony rodents that enjoy collecting shiny objects. This behavior is reminiscent of how Nocturnal's Crow Daedra act.[3] Deadlands Daedrats originate from Mehrunes Dagon's Deadlands, and are distinguished by their fiery red fur.[7] Lustrated Daedrats are Daedrats that have been Lustrated in the Colored Rooms. A notable instance of a time where these Daedrats have come to exist would be the period following the end of Nocturnal's invasion of the Colored Rooms. A number of Evergloam Daedrats unknowingly followed Nocturnal's invasion force into the realm. After the invasion was quelled, the Daedrats were rounded up and purified, then banished from the plane.[8] The Slate-Skinned Daedrat is a grey Daedrat with black striping and cold blue eyes. They differ from the average Coldharbour Daedrat in appearance. Their appearance stems from their diet, which consists of corpses touched by Molag Bal. Scholars seeking to research or oppose the Lord of Brutality often study these rodents for insight.[9] Daedrat spirits persisting after death have been documented, such as when the explorer Theldyn Faden killed a Daedrat and it ended up following him home as a ghost.[10]

Ravenous Rodents are tiny daedrats that stare with forlorn eyes, considered to be The Mad God's pests. They chitter quietly, and those who listen carefully may be able to understand what they have to say, with great calamity befalling those who listen to their lies.[11][12] When Uncle Leo became a guest in the Chateau of the Ravenous Rodent in Dementia, he began to fall in love with the rats there, which Sheogorath regarded as an embarrassment.[13] The Order of the Eye takes serious measures to contain any of the rodents smuggled into Tamriel from the Shivering Isles.[11]