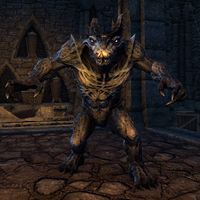 Daedroths are crocodile-headed bipedal Daedra associated with Molag Bal.[1] They can also be found serving Mehrunes Dagon.[2] They are strong, hulking, reptilian Daedra with animalistic tendencies, but still a dangerous foe with powerful clawed arms and moderate magical ability.[3] Though some have been known to use weapons and wear simple armor, most attack with bare claws.[4] They have a powerful bite and the ability to spew hot flames.[5][6] Some daedroths can spit poison or shock magic.[7] They stand roughly at the height of a mortal (if not taller),[5] and can be summoned in gargantuan sizes.[8] Particularly large daedroths are difficult to summon, and can only be controlled by those with a strong will.[9] Daedroth sacs and teeth are used in alchemy.[10]

Linguists will point out that "Daedroth" is also the proper singular form of "Daedra", but for these creatures the common usage is Daedroth (singular) and Daedroths (plural), with Daedra (both singular and plural) being used as the generic term.[11] The term "Lesser Daedra" is sometimes used (again, both singular and plural), though this appellation technically refers to Daedra of all types beneath the Daedric Princes.[1]

Daedroths can be seen existing in the wilds of Oblivion as wild animals do on Nirn.[12]

The Sixteen Accords of Madness are stories of Sheogorath's encounters and triumphs over other Daedric Princes. The sixth volume describes a wager made between the Mad God and Huntsman after Sheogorath called to Hircine on his summoning day. Intrigued by Sheogorath's bravado, Hircine accepted the Mad God's terms: three years from then, they would have a duel between their champions. Hircine imbued a daedroth with lycanthropy, making it his most deadly hunter. Sheogorath's champion was a bird that was unaware of the situation, and inadvertently caused the monster to commit suicide as it tried to pluck it off its face. With his pride greatly wounded, Hircine burned the corpse of his creation, cursed the peaks in Skyrim where the duel happened, and returned to his realm humiliated.[13]

Molag Bal employed two notable daedroths as generals during the Planemeld. The first was the "Daedroth Monarch"[14] Menta Na, who is known as Molag Bal's "most favored pet".[15] The other was Hrelvesuu, who had taken an interest with the "toys of mortals".[16] They were ordered to defend their master's Dark Anchors. However, they were vanquished by the Fighter's Guild, and the Anchors they were guarding were destroyed.[17]