This article is about the Daedric race. For the Daedric Prince, see Nocturnal. For the baron of Lainlyn, see Shrike. 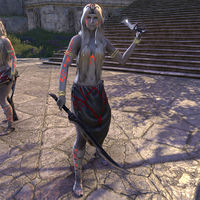 Nocturnal Shrikes[1] (sometimes simply called Nocturnals[2] or Shrikes) are a race of Daedra found in the Evergloam, Nocturnal's realm of Oblivion. In appearance, they resemble tall, pale,[3] scantily clad, beautiful women.[4] Despite their power, Nocturnal Shrikes are prone to bouts of debilitating melancholy. The race is seemingly caste-based, with the terms "greater" and "lesser" used to draw distinctions between two individuals of varying power.[2] They often utilize dark magic associated with crows.[5]

Lesser Nocturnals serve greater Nocturnals faithfully, offering counsel, and have even been known to make sacrifices out of love for their mistresses. The Nocturnals of Shade Perilous are led by the Nocturnal Lieutenant Jaciel Morgen.[2] Nocturnal Shrikes have various other ranks and titles, such as Crowcaller, Executioner, Gloom Siren, Nightmaiden, Night Sister, Shadowweaver, Shroudweaver, and Talon.[6]

Circa 2E 582, Nocturnal Shrikes invaded the Clockwork City as part of Nocturnal's plan to conquer the realm.[7] They invaded many other realms, including Tamriel and the Fields of Regret, when Nocturnal took control of the Crystal Tower later that year.[8][9]

The Nocturnals of Shade Perilous suffered greatly during Mehrunes Dagon's invasion of the pocket realm during the Imperial Simulacrum. The invasion was instigated by Xivilai's Clan and Shardai Clan, and was viewed even from within Clan Dagon as entirely unnecessary. The Nocturnals were aided by a mortal apprentice from the Battlespire, who helped awaken Jaciel Morgen from a deep sleep caused by her excessive mourning following the invasion. In retaliation, Jaciel confronted Dagon alongside the apprentice, holding back the Prince's power long enough for the mortal to banish him to the Void.[2]

Following Imago Storm's temporary control over Clan Dagon, it is likely that the occupation of the Shade Perilous was ended, although it is unknown whether or not the Nocturnals regained control of the realm.[2]

Nocturnal Shrikes have been known to perform strange rituals on mortal cultists, turning them into vengeful spirits known as Night Terrors.[10]