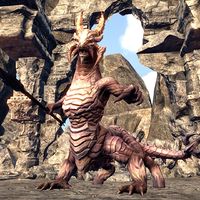 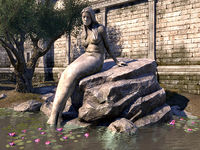 Mermaids (also called the Selkie) are mythical creatures with a presence in the Abecean Sea. They resemble young women with a long fish tail instead of legs, but the nature of these creatures is unknown. 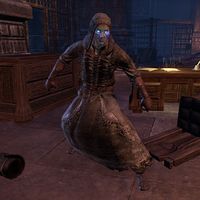 Mind-Shriven are mortals or Daedra who have had their will and mentality stolen by Molag Bal, the Daedric Prince of Domination and Enslavement. They are not to be confused with Soul-Shriven, dead mortals whose souls have been stolen by Bal and replaced by a Daedric vestige. Unlike these "vestiges", Mind-Shriven are not dead and have retained their mortal bodies.

Becoming a Mind-Shriven involves drinking a poison known as the Blood of Coldharbour, which will slowly begin to rob the imbiber of their willpower. This process can be delayed through alchemy, but not halted. Mind-Shriven can be identified by the wispy blue veins of cold fire that emanate from their veins, and their glowing blue eyes. Once the transformation is complete, the victim takes on a lifeless, pallid grey tone and becomes mindlessly aggressive. Some of the afflicted experience side effects apart from the intended effect, such as their vision being tinted blue as their eyes change. The process is not just effective on the mortal races, as horses and wolves have been transformed into Mind-Shriven. Even lesser Daedra can become Mind-Shriven, as in the case of Mind-Shriven Scamps, unusual specimens which are often found in the company of other Mind-Shriven creatures.

They have thick grey or sometimes brown or red hide and fur, and large curved horns. Some Minotaurs clothe themselves in a simple loincloth and shawl or wear nose-rings. Others wear intricate leather armor, and some prefer to be completely naked. They are most commonly found in the Blackwood, Colovian Highlands, Great Forest and the Gold Coast regions of Cyrodiil, as well as The Scar of Elsweyr, the Reach of Skyrim, and in ancient times across Bangkorai and Valenwood.

Large tree-like creatures that can be found across Murkmire. According to Argonian folklore, they have existed as long as the Argonians themselves. Some believe them to be the "wrath of Murkmire", while others believe the Hist sends them to teach lessons.[1]

Although they consist mainly of plant substance, they sometimes incorporate other materials into their shape, including mud, stone, vines, and even pieces of ancient architecture. They bear some small resemblance to lurchers and similar creatures found in other parts of Tamriel, but in all other respects they appear totally unique creatures.[1]

Every miregaunt has a large cavity in its mid-section. Sometimes an encountered miregaunt's cavity is empty. Other times a random piece of stone or other detritus fills the empty space. In rare cases, something valuable rests within the miregaunt, such as a precious stone, an ancient relic, or even a living creature. The local Argonians believe that these valuable objects have been taken into the miregaunt to purposely protect or imprison them.[1] Miregaunts are part of the land: when one is struck down, it will inevitably come back later.[2]

Mistmen are the floating, ghostly undead of the Soul Guard found within the Soul Cairn. Mistmen have the ability to cast elemental destruction magic, though they will resort to punching should they run out of magicka. They are described as collective manifestations of happy spirits that are in service to the Ideal Masters.

These somewhat intelligent horned Daedra have been seen in service of Mehrunes Dagon.

These are a species of bright-green frogs found in the coastal marshes of Murmkire near Lilmoth. As they have no natural predators they are known to be docile and playful creatures.[3] The Moss-Foot Croaker is prized for its croaks and is used in the creation of the vossa-satl, an Argonian musical instrument.[4] 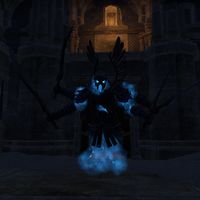 Mournful Aegises are giant suits of armor animated by powerful Yokudan magic. They are similar in appearance to Air Atronachs. Larger aegises will split smaller Mournful Aegises off of them when damaged sufficiently.

The Mudcrab (or Mud Crab) is a common species of crab capable of camouflaging itself as a small rock. They can be found along every shore and waterway of Tamriel, and are also a common sight underground. They are not typically aggressive unless cornered or provoked. However, if a mudcrab ever gets a taste of meat it becomes a hunter, and may be a threat to livestock. Mudcrabs are usually not dangerous unless they swarm, as they rely solely on their pincers and burrowing abilities in combat. Some mudcrabs can grow to enormous sizes, and rare albino variants are known to exist.

Large specimens sometimes cannibalize smaller mudcrabs. Although they are inquisitive by nature and can be kept as pets, most citizens of Tamriel regard mudcrabs as disgusting vermin. Many different varieties of mudcrab exist; two known species are the Nibenay Mudcrab and the Rufous Mudcrab. Mudcrabs are prized for their sweet crab meat and legs, and their chitin is sometimes used in alchemy.

Mules (or Pack Mules) are animals that are ridden and used for carrying large amounts of supplies. They have a reputation for being stubborn and kicking. They may have some relation to donkeys as they are also known as asses.

Mummies are a powerful form of undead. The practice of mummification of the honored dead is common in many cultures across Tamriel. This often involves covering the preserved corpse in distinctive cloth wraps; such mummy wrappings can be used in alchemy. Sometimes the body is also fitted with a death mask. Bodies preserved in such a manner are liable to rise from the dead, either due to an inability to pass on or due to the actions of a necromancer. Undead mummies require a silver or better weapon to be harmed, and often carry horrible diseases. Those who take a body part from a mummy can be subjected to a "mummy's curse", and will receive nightly hauntings until the mummy is destroyed.

Certain Elven peoples are known to practice mummification of their dead. The Ashlanders of Morrowind use ash salts to preserve the bodies of the dead, unlike House Dunmer who usually cremate their dead. The Ashlanders glorify their dead in accordance with their traditions of ancestor worship, and these mummies are prominently displayed at the tribe's burial site. The Ayleids also practiced mummification, and undead Ayleid mummies are often powerful spellcasters.

Men also widely practice mummification. Undead mummies are a common sight in the Iliac Bay region. Bretons are sometimes known to mummify their buried dead. The practice is very common among Redguards; mummification of the dead is a tradition that stretches back to the first arrivals from Yokuda, and undead mummies often plague Redguard crypts. The crypts beneath the Imperial City are also known to contain undead mummies.

The Khajiit of Elsweyr also widely practice mummification. They have even been known to reanimate the mummified corpses of cats to serve as eternal rodent-catchers.

Banekin are sometimes mummified, although it is unclear what this process means for an immortal Daedra.

A breed of musk ox was once native to Markarth, but was extinct by the Second Era. Its large horns may have been used by Reachmen as warhorns.[5]