The UESPWiki – Your source for The Elder Scrolls since 1995
< Lore: Bestiary: K
Jump to: navigation, search 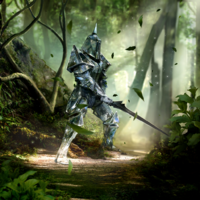 A Knight of Order (Legends)

The Knights of Order are mindless Daedric[1][nb 1] soldiers resembling crystalline-armored knights. They serve the Daedric Prince of Order, Jyggalag, and make up one part of the Forces of Order, which also includes the Priests of Order and Jyggalag. Their origins and their goals are unknown. They are soulless warriors that kill without hesitation, and it is therefore highly advised to destroy them on sight.[2] They are said to be without "a bit of original thought in their lifeless husks".[3] They are only ever encountered during the Greymarch at the end of every era, during which they are summoned to the Shivering Isles via the Obelisks of Order that dot the landscape of the realm, wreaking havoc in anticipation of Jyggalag's return.[4] The Knights are drawn to Obelisks like "flies to honey", and are summoned by Priests of Order though chanting and rituals.[3]

They are naturally attracted to the Resonator of Judgment in the ruins of Xedilian, which was made from the obelisks.[2] The Knights of Order are naturally resistant to magic and poison.[4] Hearts of Order are a rare alchemic ingredient harvested from the chest of a fallen Knight. These are utilized by Priests of Order as keys and power sources. Three hearts are enough to overload an active Obelisk of Order, temporarily deactivating it and allowing its Priest to be killed.[5][6][7] Circa 4E 201, the manic wizard Thoron seemingly made use of these hearts together with the Sword of Jyggalag when attempting to open a pathway to the Isles from Tamriel.[8]