Speak to Lady Almalexia in the High Chapel, once the Trueflame blade has been reforged and she will tell you of the third Tribunal god, Sotha Sil. Apparently, the god has become mad over the years tinkering in his Clockwork City. Almalexia believes that he must be stopped, as he is a danger to all of Morrowind. The Trueflame blade is capable of killing Sotha Sil and, of course, it is up to you to do so. When you are ready, the Lady will teleport you to the Clockwork City.

Note: Once you go to the Clockwork City, you will be stuck there until completing the quest (recall and intervention spells will not work). Make sure that you have everything you need, before telling Almalexia that you're ready. 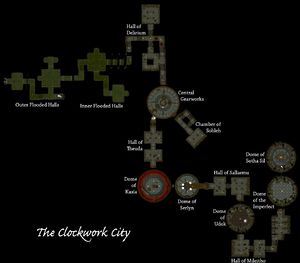 Map of the Clockwork City

The first door you encounter can be opened by a small lever, located on a pillar in the center of the room (many of the doors are opened in this manner). The hallway beyond the door contains a couple of swinging blades, which you will want to avoid (they pack quite a punch to both you and your enemies). More traps await you in various areas. In the Hall of Delirium, watch out for the spike trap whenever you see a splotch of blood on the floor. As you explore the city, it is advisable that you take as many elixirs from the Fabricants you encounter as you can - you are likely to need them in order to progress through some of the later areas. The areas of the city are, in order of access:

The Dome of Kasia contains a trap that requires quick feet to evade. If you look up, you will see a huge, rotating mechanical arm with a saw at its end. As soon as you step onto the balcony, from which you must access the door in order to progress, you are in danger of being hit by the saw, which will kill you instantly. In order to run around to the door quickly enough to avoid the saw, you will need to use Fortify Speed effects in order to increase your running speed. The elixirs dropped by Verminous Fabricants fortify speed, and you will probably have to drink several of them in order to beat the saw. Another way to get past this trap is to use a Jump or Fortify Acrobatics spell/potion (e.g. the Scroll of Icarian Flight) and jump from the floor onto the ledge.

There's a short puzzle in this small area with two levers and a machine that makes the Verminous Fabricants. The left switch opens the front door and the right switch opens the back door; however, you cannot operate both at once. The trick here is to flip the right switch to open the back door, then flip it a second time to close it, then open and close the front door. When the machine starts making noises and the tubes overhead move, open the back door again. The front door then will open automatically to release the Fabricant, leaving both doors open, and you will have a few moments to pass before the front door closes again.

Upon entering this area, you will see a large chasm filled with lava separating you from the door. To your right is a 'rusted lever' which requires a Strength of at least 100 to operate. Unless your strength is already at maximum through leveling up, you will need to use Fortify Strength effects in order to push the handle down. Fortunately, the Hulking Fabricants carry an elixir which fortifies strength, but unless you have already obtained enough to increase your strength above 100, you will become trapped in this area, as there is no way back through the Dome of Serlyn. Once you have activated the lever, the bridge is constructed and the way to the door is cleared.

An alternative (though difficult) option is to run around the narrow rim towards the door. If you run around the side to the left of the way in (the side with the verminous fabricant), you should be able to jump onto the bridge. Alternatively, a spell or potion of jump can be used to jump across directly. From here, there is a small gap between the bridge and the wall, on the right-hand side. Through this, if you position yourself correctly, the door can be selected and traveled through.

You will see two giant Dwemer-like statues guarding the exit in this small dome. While they both look static one of them is in fact active and will attack you when you move close enough (you can see the shadow of the active one if you have them enabled). The construct is called an Imperfect and it offers quite a fight in this confined space. Imperfect is magic resistant, casts a nasty shock spell and hits very hard. Use whatever strategy you like to defeat it. The Imperfect is quite slow so you could use spells from afar then move in for the final blow. Note that you will be unable to enter the Dome of Sotha Sil until the Imperfect has been killed. Now, take a little breather before entering the next room. The next fight is against the toughest single opponent in Tribunal, so make sure you are ready. 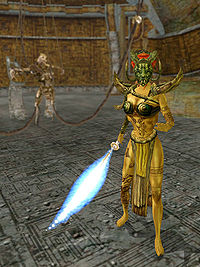 When you enter this Dome you'll find the lifeless body of Sotha Sil. Activating his remains will yield an onscreen message: "You have found the body of Sotha Sil, his lifeless hulk dangling from a contraption of his own making. Someone has obviously been here before you." Now that your job appears to have been done for you, all that's left to do is go back home and tell Almalexia that Sotha Sil is dead, right? Well, not quite: when you try to leave the Dome, Almalexia will appear before you and launch into a long speech.

From her ramblings, it appears that Almalexia really is the one who has gone mad from the loss of her divine powers, not the late Sotha Sil, and now it is your job to die as a martyr. She reveals that the Fabricant attack on Mournhold was in fact her doing, with the aim of appearing to save the city from the disaster which she in fact caused, thereby rekindling the love of her people. Once her speech is done, the fight is on. Almalexia is no pushover (she's a living god after all), since she has impressively powerful spells, magic resistance, speed, and Hopesfire, which packs a mighty melee punch.

Try to dodge most of her spells, although Spell Absorption and Reflect spells/enchantments can make this less necessary. If you have Azura's Star don't forget to cast Soultrap on her before delivering the final blow, since her soul has a whopping charge of 1500. Once Almalexia is dead, you'll receive another journal entry and you can recover from her corpse the Hopesfire Blade (similar to the Trueflame but with shock damage) and the Mazed Band which summons a Fabricant for 2 minutes as well as allowing to you to teleport to Vivec, Mournhold, or The Clockwork City.

Equip the Mazed Band and teleport back to Mournhold; you cannot teleport anywhere else at this time. Exit the Temple and you'll be once again greeted by Azura. She confirms what you already might know: it was Almalexia who was mad and not Sotha Sil. She also rids Mournhold of the ashstorms as her "gift to the Dunmer people". You can return to both King Helseth, to let him know what you've discovered and receive a full set of Royal Guard armor (as part of his quest), and Vivec, to hear his thoughts about the future of Morrowind. You can try to tell people what happened, but almost no one will believe you, and they will lose disposition points while shunning you or believing you to be insane.