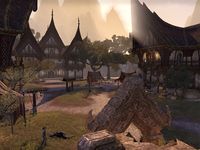 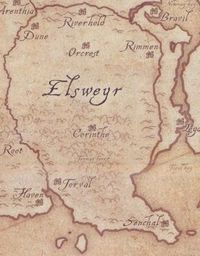 Map of Elsweyr
"Dune stands forever. Challenge our land if you dare, for we are the best blades of the south, and we will show any who come to our door adventure..."

Dune (alternatively known as Dunei in Ta'agra[1]) is one of the eight major cities in the province of Elsweyr,[2] in which it serves as the largest Khajiiti-settlement on the borderlands of Reaper's March. Present-day Dune is most well-known as a prominent merchant town with its graceful architecture and abundance of tea houses,[3][4] but in ancient times, the city was the seat of a kingdom that was known for their moon priests and scholars. At that time, the Kingship of Dune also held the title of Moon-Bishop.[5] 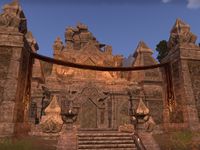 Dune is located on the northwest corner of the province, on the borderlands of Reaper's March. Both geographically and politically, the city is located in the savannahs of Anequina, which are generally known for their arid and dry climates.[6] More specifically, Dune is located east of the Crescent River, which forms the north border of the province with Valenwood. The land that surrounds the city is rocky and riddled with dried-out ravines, but behind the city is a large river that pours into the city and creates lakes and ponds.[7] Dune is neighbored by several settlements, including Cori Darglade to the east-northeast, Ein Meirvale to the far southeast, Verkarth Hills to the south, and Valenwood to the west,[2] towards Arenthia.[8]

The city is built on a very large hill and it is layered five times toward the top. The bottom and first layer is where the local wayshrine, as well as several camps are located. The main road runs past the city goes through the camp and under an arching bridge that connects the third layer of the city to the wayshrine. The second layer is the city's plaza, where many homes are located, all of which centered around a watering well. There is enough space for merchants to camp more stalls and caravans. On the wall east of this area are three stairways that lead to the third layer, a grand avenue with tapestries and high pointed walls. From the north and south end are stairways that descend into the city's local merchants district and the temple district respectively. The former is a stretch of paved road with several guildhalls and crafting stations. At the end of the road is a waterfall and basin. The latter is a somewhat flooded courtyard with three shrines dedicated to Jone, Jode, and Lorkhaj respectively. The central stairway continues to the highest layer, where the Temple of the Two-Moons Path is located.[7]

Since the long-lost annals of the Merethic Era, Dune has been one of the ancient sixteen kingdoms that would become modern-day Elsweyr. In its time, the kingdom was known for its priest and scholars, and the highest form of authority in the kingdom was the Moon-Bishop of Dune.[5] The city's architecture was designed to venerate the Two-Moons, Jode and Jone, and it is reminiscent to those bygone times, when the sixteen clans were governed under the authority of the Moon-Emperor.[3][13] The Kingdom of Dune encompassed much of modern-day Reaper's March, from as far as present-day Rawl'kha.[14]

In the Merethic Era, the sixteen clans were ruled by a cruel hunter-aristocracy led by Hunt-Lords, one that clashed with the Temple of Two-Moons Dance. The Hunt-Lord, Takanzin the Striped-Death paid a flock of criminals to raze the Temple in Rawl'kha, and in retaliation, the clergy and monks assembled a small army of warrior-adepts. But the Hunt-Lord was able to quash the rebellion and forced them out of Dune's kingdom. He cited the violence at the temple as evidence of the clergy's treason and with the other northern Hunt-Lords, confiscated weapons from the people and suppressed any religious order that did not comply with them. In deep isolation and contemplation, the disparaged adepts developed the Claw-Dances, the Khajiiti martial arts. By the late Merethic Era, the peasant class of the northern kingdoms were drafted in many wars and fell into a state of famine. When the adepts passed their newfound knowledge to the peasant-folk, they started to revolt and eventually overthrow the Hunt-Lords. Within a century, the hunter's caste system was diminished.[14]

The Mane and the Kingdom of Anequina[edit] 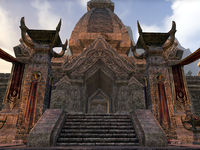 Temple of the Two Moons Path

When the Thrassian Plague swept through the continent in the twenty-third century of the First Era, the sixteen kingdoms were decimated and the sheer number of deaths forced the clans to come together and survive. The northern clans including Dune joined with the Ne Quin'al and turned into the modern-day Kingdom of Anequina, who continued their long established traditions and roamed the arid landscape. The King of Anequina, Keirgo later married the Queen of Pellitine, Eshita in 2E 309, which formally created the province of Elsweyr.[15]

The Second Empire of Cyrodiil had at some point took over Elsweyr[16] and by its late years, established a stronghold in the northern plains near Dune called Fort Sphinxmoth. It was placed there to moderate the level of crime and banditry that took place in Reaper's March. From the Khajiiti side of the march was the notorious Dakarn Clan, who eventually decided to take over organized crime in Dune and nearby Thizzrini Arena at the height of their power. In response, the upper class of Dune hired mercenaries and formed militias to take them down. The remnants of the Dakarn Clan became the Duneguard Outwalkers and peace was restored throughout the region.[17]

After the death of the royal family in 2E 326,[15] Rid-Thar-ri'Datta was named the first Mane of Elsweyr and re-shaped the culture of the Khajiiti. Since then, a new tradition had been created for the process of a new Mane, in which they travel down three paths, starting from the temple in Rawl'kha. The final path is called the Two-Moons Path and it takes places in the Temple of Two-Moons Dance in east-central Dune.[18] The candidate walks down these paths with the Moon Hallowed, a herald blessed by the Manes of past that appears in troubled times and guides the Mane to a better tomorrow. Their role is determined at the Moonlit Clearing, an isolated shrine in the Northern Woods.[19] 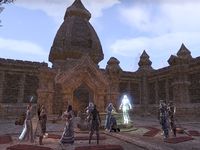 The Ascension Ceremony of the Mane 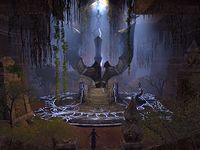 The Dark Anchor in the Lorkhaj Shrine

Sometime in Sun's Height in 2E 581, the Dark Anchors of Molag Bal crash-landed near the city walls of Dune. Out of the scars where the anchors landed, the Dro-m'Athra crawled out. Various daedra such as the banekin and clannfear were deployed and commanded by the Dremora and necromancers, the latter of whom also summoned an army of undead. A feeble defense of armored Khajiit formed at the city gates but the horde was left unfazed. As the dark anchor grew more powerful, the landscape began to glow faintly blue like Coldharbour and a daedric titan descended onto the city. It is unknown how the city faired in the end, but it managed to rebuild later, at the expense of many lives.[3]

A year later in 2E 582, the high-ranking authorities of the Aldmeri Dominion traveled to Dune to witness the Lunar Champion and the Moon Hallowed walk the Two Moons Path, but as the Colovian invasion still raged in the north, Javad Tharn and his Stonefire Cult unleashed a slew of daedra from the middle of town, even paid off the local Mages Guild officials. With a re-configurated sacred Khajiit relic, fueled by the arcane magic of Atronachs, the Moon Hallowed destroyed every portal throughout the town. In the Merchants District, the Moon Hallowed defeated the corrupted guildmagister and destroyed the portal, and later traveled to the Temple District, where the shrines were defiled and a dark anchor opened in the Shrine of Lorkhaj.[20] Once the town had been liberated, the Moon Hallowed and the Lunar Champion disembarked on the Moonlit Path, where they defeated the Dark Mane and Javad Tharn in the bowels of the Den of Lorkhaj. After they defeated Tharn, the spirit of Rid-Thar-ri'Datta proclaimed the Lunar Champion as his successor.[21]

Dune in the Third Empire[edit]

During the Imperial Simulacrum in the late Third Era, the city-state of Dune was an active settlement. It was ruled by King Ab'ir and had a rivalry with Riverhold.[9] The border land near Dune and Fort Sphinxmoth, where many northern skirmishes in the Five Year War took place. By the spring of 3E 396, the Five Year War moved closer to the Dune region.[22]