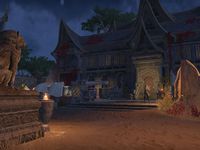 Meirvale (also known as Ein Meirvale)[1] is a historic area within the region of Anequina, within the province of Elsweyr. In its time, Meirvale was one of the original sixteen kingdoms of Elsweyr, known for their brewers and distillers.[2] But gradually, the Kingdom of Meirvale had fallen into obscurity with the changing times, and all that remained was the barren wastelands known as the Scar. To this day, instead of drinking their spirits up, the people of the Scar now drink in sorrow. What little remains of the kingdom is the Meirvale Keep, which now serves as the seat of power for the shanty town of the Stitches.[3]

From the Merethic Era to the late First Era, Meirvale stood as one of the original sixteen kingdoms of ancient Elsweyr, when their people were known for their brewers and distillers.[2] In Elsweyr's Merethic history, these kingdoms were ruled by feudal hunt-lords and a cruel hunter-aristocracy. By the latter years of the Merethic Era, the Kingdoms of Meirvale and Helkarn waged war, which lasted for three years. To bolster their ranks, their hunt-lords drafted thousands of peasants, inadvertently bringing one of the worst famines in Elsweyri history. Eventually, their armies turned against them and slaughtered the hunt-lords. These efforts caused a domino effect across Elsweyr, where more and more peasant uprising toppled their monarchy. Within that century, Elsweyr's aristocracy was brought to a violent end.[4]

Like the other sixteen kingdoms, the Kingdom of Meirvale had fallen with the arrival of the Thrassian Plague in 1E 2260. What remained of Meirvale was absorbed into the Kingdom of Anequina.[5][6] Where Meirvale once stood has become known as the Scar, the barren desert that cuts through Northern Elsweyr and contains the region's banditry and lowlifes. Where Meirvale's people once drank happily, is now known for the people of the Scar, who drink to their sorrows. The shanty town built in the Scar, the Stitches exemplifies the lifestyle adopted by the Scar.[3]

Sometime around 2E 582, Meirvale was ruled by an Imgan Lich-Queen, but she was dealt with by Razum-dar, a well-known spy of the Eyes of the Queen, a secret network of intelligence that served the First Aldmeri Dominion.[7]

During the Interregnum around 2E 582, the lord of Meirvale Keep was a Khajiiti rogue known as Dashing Dasalzo. He was well-respected across the Stitches, but his life was cut short by one of his own. The alleged perpetrator, Tasnasi was banished from the Stitches while her contemporary, Khasda assumed the role as the leader of the Stitches. His reign was not well-received by the people, and Tasnasi was planning to clear her name. Enlisting the help of a wandering traveler, Tasnasi, and her companions infiltrated Meirvale Keep, where she learned the truth. Khasda had assassinated Dashing Dasalzo and framed the murder on Tasnasi, to claim Meirvale's treasure for himself. It is unknown whether Tasnasi killed Khasda or not, but regardless, the truth had been revealed to her and the Stitches continued on.[8]

During the Imperial Simulacrum in the late Third Era, the town of Ein Meirvale was an active settlement. It was ruled by Princess Khasrin, and it had a rivalry with Seaplace and Portneu View.[1] It was neighbored by several settlements, including Dune to the northwest, Heimthor Mount to the south, and Neumar Walk to the northeast.[9]

The nearby settlement of the Merryvale Farms shares a very similar name to the original kingdom of Meirvale as if it was corrupted into "Merryvale." The Khajiit that live in Merryvale are known for harvesting Moon Sugar, which can be made into alcohol such as rum.[10][11]