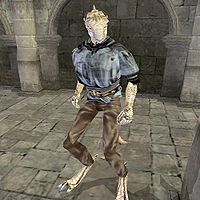 An-Deesei is an Argonian monk working at the Argonian mission in Ebonheart, and a member of the Twin Lamps. She can be found in the basement of the mission. She is wearing a common shirt and pants, and carries a netch leather cuirass, matching greaves, and up to 20 drakes. Like all Argonians, she is immune to poison, has a resistance to disease, and can breathe underwater, but otherwise knows no spells.

Monks around Vvardenfell will tell you to speak with her if you are interested to learn about a monk's trade. She has unique dialogue on monk-related topics.