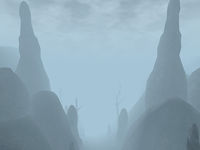 Valley of the Wind is a dried-out foyada found on the northeast coast of Vvardenfell in the province of Morrowind. It is a long, winding valley that curves upward into a j-shape toward the end. It is completely uninhabited and out of the way from the nearest settlements, such as Vos to the east and Dagon Fel to the north across the water. It is avoided by the local populace because they claim that "the winds howl, and the spirits are always awake."[1]

The Valley of the Wind lies on the northeastern slopes of Red Mountain, adjacent to another valley to the west called the Dry Camp Valley, which contains no water as the name suggests, but it works well as a safe haven from the harsh winds. The valley's entrance is marked by Airan's Teeth, two large stone spikes named after the seer blessed by Azura.[2] There is another landmark in the area called the Needle, a tall rock column with a pale white rock at the top of it.[3][4]

In the middle of the valley is the Dareleth Ancestral Tomb and at the very end of it is the Cavern of the Incarnate, the final resting place of the many Failed Incarnates throughout the years.[5] Right outside the valley is an old, ornate wayshrine that looks over the Sea of Ghosts.

In 2E 582, the Vestige journeyed to the Valley to speak with the Failed Incarnates.[6]

When the Blight Outbreak occurred in 3E 427, the Nerevarine traveled to the Valley of the Wind and entered the Cavern of the Incarnate, where they met with past incarnates and acquired the Moon-and-Star. They emerged from the valley after being officially recognized as the true Nerevar Incarnate.[7]