The UESPWiki – Your source for The Elder Scrolls since 1995
< Lore: Flora: G
Jump to: navigation, search 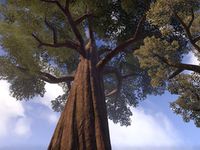 "Sprawling across both banks of the river stood the mighty graht-oak city, with groves and orchards of lesser trees crowding it like supplicants before their king. At a lesser scale, the tree that formed the moving city would have been extraordinary: gnarled and twisted with a gorgeous crown of gold and green, dripping with vines and shining with sap. At a mile tall and half as wide, it was the most magnificent thing Scotti had ever seen." — A Dance in Fire[1]

The graht-oaks are massive, ambulatory trees native to Valenwood. The Bosmer are known to build entire cities in the branches of these great trees, most famously Falinesti.[1] In their mighty boughs, Bosmer live alongside the ape-like Imga in a mobile ecosystem, coaxing the living wood into pathways winding around hide structures nestled in hollows.[2][3] The canopy of the trees is so large that it is sometimes called the second sky, or the middle green.[4] Emblematic of their reverence for nature, the Bosmeri Tower, Green-Sap, is represented in each and all of the graht-oaks, rather than in a single erected structure as with White-Gold and Ada-Mantia.[5]