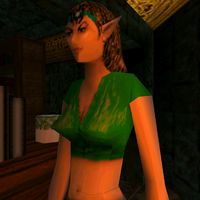 Falicia is a Bosmer Apprentice of the Mage's Guild who sells potions in the guildhall. She can provide you with health, strength, and ironskin potions for 25 gold each. When you ask her about the Flask of Lillandril, Falicia says one of the four map pieces was inscribed on the bottom of a silver boat.

Once you have been to the League hideout and learned about the soul gem, Falicia will reveal many details about Iszara. She says Iszara brought the soul gem to the Mage's Guild hoping a high ranking member would know how to use it to restore Prince A'tor. A guild member, Joto, decided to help her research soul gems, but eventually Dram showed up at the guild and arrested him.

During the conversation, Archmage Jaganvir will interrupt her and cast a spell that turns Cyrus into a gremlin.

Falicia's Confession
Falicia has a lengthy conversation with Cyrus about the soul gem. She mentions how Joto was thrown in the Jail, but is soon interrupted by Jaganvir, who scolds her and turns Cyrus into a gremlin.

"Put that away, please. This is no place to show a weapon."

"Sir. Please. You're not allowed behind the counter."

"Please! This is not an athletic field!"
"Sir! You forget yourself!"
"Stop it! That's not funny!"'
"Please stop. You'll get me in trouble."

"Hello."
"Hello, stranger. Welcome to the Mage's Guild of Stros M'Kai, fully chartered since 638 CE. I'm the resident shopkeeper hereabouts.
"Feel free to look around, but remember everything is guild property. If there is anything you'd like to buy, just let me know."

After you are changed back from a gremlin:

"You're back! I'm sorry about Jaganvir. He's crazy."

If you said she was lying in "Soulgem":

"Take a potion for your trouble."
(Receive health potion)

"I am looking for a young woman named Iszara."
"The name is not familiar, sir; might she have been a member of the guild?"

"It's unlikely, but she may have been a customer here at your shop."
"I can't recall anybody by that name, but so many people come here from day to day it's no surprise.
"And I would be the only one who works the shop since my apprenticeship, for some cruel reason, seems relegated to retail."

"I doubt it, but she may have been."
"My apprenticeship here has lasted several years, and I haven't met any member named Iszara yet. But, who knows, many members of the upper cabal are of the secretive sort."

"Do you know anything about the Restless League?"
"I'm afraid not. The Mage's Guild tries to stay out of the lesser politics."

"What kind of town is Stros M'Kai?"
"I'm too busy studying to pay it much mind. Plus, with the Empire here, the streets feel kind of dangerous."
"So you never leave the guild?"
"If you want to know the truth, wide open spaces kind of make me nervous. Many Wood-Elves are like that, you know."
"They miss the canopy of the Valenwood trees...."
"Our second sky, the middle green. Let's just say I don't wander around in Stros M'Kai enough to know that much about it."

"How old is the Mage's Guild?"
"This one, or the institution itself? This one is fairly new, two hundred years and a fourth more. Modern magicks came late to Hammerfell."
"Redguards have strong traditions."
"But even they took finally to the notion of a more controlled and conscious auspice for magic. The Mage's Guild was a reaction to the mass hedgery of old, when magic was wild and unbalanced."
"How very modern for an elf."
"When you're a student you embrace the institutional line-- if you want to graduate."

(Unlocked by "Iszara" or "Mage's Guild")

"How long do you have to be an apprentice, Ms....?"
"Falicia. And it's been way too long. I think the guild has a prejudice against elves based on the fact that we live so long --
"-- and have the potential of reaching heights no human wizard could ever dream for, unless he goes the rotting way, which so many do, but I guess I'm just being bitter.
"One day I'll make Archmage, and maybe none too soon considering there's an opening now."

"Who is the Archmage?"
"Human named Jaganvir, a real hardcase. Doesn't really have enough secrets to be Archmage, but the last one was killed at the Battle of Stros M'Kai so there was a vacuum to fill."

"Do you think Jaganvir knows anything about Iszara?"
"Wouldn't tell you if he did. He doesn't talk to mundanes, and he's too busy studying for the Battlespire to be seen lately."

(Unlocked by "Apprenticeship" or "Jaganvir")

"What's the Battlespire?"
"A war college set up by the Empire to test its battlemages; an elite Mage's Guild, really.
"Archmage Jaganvir's got his sights on the Battlespire recently, though why anybody would want to hang out with those losers is beyond me."

"What happened to the last Archmage?"
"Voa's Redguard blood got the better of him. He died in the Battle of Stros M'Kai fighting alongside the Prince."

"The Mage's Guild helped the Crowns in the battle?"
"Not the Mage's Guild, just former Archmage Voa. He was a nationalist as well as a guildmember, and couldn't help himself. Got killed for mundane politics."

(Unlocked if you answer I'm not sure to "Iszara")

"Maybe I could speak to somebody in the upper cabal..."
"Sure. You'll be right after me, as soon as you get ten years of apprenticeship under your belt and can cast an 'alter reality' spell.
"The new Archmage, Jaganvir, he doesn't talk to nobody, and would make everybody else in the guild do likewise, except for me, since I run the shop."

(Unlocked by "Stros M'Kai" or "Battlespire")

"Has the Empire interfered with the Mage's Guild yet?"
"Of that I am not at liberty to say. Let's just say Archmage Jaganvir is trying to stay on their good side. He's got his greedy eyes on the Battlespire."

"I heard one of your members got into some trouble with the Governor."
"I'm... not supposed to talk about that."

(Unlocked after quest Contact the League; disappears once asked)

I Think You Know

"Please, Falicia, I think you know why I'm asking. Iszara disappeared shortly after stealing the soulgem from the Restless League. I think she may have come here with it."
"She...did. I'll tell you about it."

"Don't lie to me, girl! Iszara stole a soulgem from the Restless League and I think she came here with it! If you don't tell me --"
"Keep it down, will you? I'll tell you what I know...."

(Unlocked after you are changed back from a gremlin)

"I tried to free Joto but he didn't make it."
"I guess I'm sorry for that, too. I hope he could help you find your sister."
"He set me on the right trail. I need to find the Flask of Lillandril."

"I've heard that an ancient artifact, the Flask of Lillandril, was lost on this island long ago. You know the piece I'm talking about."
"You're not the first to ask. Everybody seems to think the Mage's Guild has access to all the land's magic.
"Sorry to say the flask has not turned up for centuries. Lost on this island long ago by the elven founders of the flask, who were shipwrecked here.
"They fled Summerset Isle with the flask, hoping to buy sanctuary from the Clan Direnni in High Rock, but the seas only brought them this far. Some say there's a map to it."

"What about this map to the flask?"
"Well, nobody has seen it. The stories say it was torn into four pieces. One of the pieces was even said to have been inscribed on the bottom of a silver box shaped like a ship."

(Unlocked if you have Voa's ring)

"Do you know anything about Archmage Voa's ring?"
"I'm afraid not."

(Unlocked by "Upper Cabal", "Empire", "Archmage", or "Battlespire" if you have Voa's ring)

"Do you think Jaganvir knows anything about Voa's ring?"
"Wouldn't tell you if he did. He doesn't talk to mundanes."

"What's for sale?"
"Magical potions of all sorts."

If you haven't asked this before:

"What potions do you have?"
"Healing potions, strength potions, and potions of ironskin."

"Doesn't look like you have the gold. Perhaps later."

"How about a strength potion."
"Right here. 25 gold pieces."

"Thanks for your help."
"The name's Falicia. I'll be here."
"Thanks, Falicia."
"Thanks yourself."

Falicia has dialogue to sell you a ring of invisibility for 500 gold and ectoplasm, Hist sap, Orc's blood, and spider's milk each for 5 gold. Two related topics called "Ring" and "Potions" also exist. Most likely, these would have appeared as subtopics of "Buy Items".

This line was intended for the topic "Buy Items" after "Magical potions of all sorts."

These lines were also for the topic "Buy Items" after "Healing potions, strength potions, and potions of ironskin."

"We also have some alchemical ingredients on hand.
"Mmm. We've got Orc's blood, ectoplasm, spider's milk. A-a-and... we've even some Hist sap -- none too fresh, of course, but good enough for most applications."

After the quest Rescue Iszara, the last line of "Joto" was supposed to change: