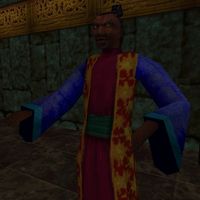 Jaganvir is the Archmage of the Mage's Guild on Stros M'Kai. He succeeded the previous Archmage, Voa, after the Battle of Stros M'Kai, during which Voa was slain. Jaganvir is currently studying for the Battlespire, an elite war college of Imperial Battlemages, located between the planes of Oblivion and Nirn. Before you go to the League hideout, he appears outside his study room about two-thirds of the time.

The new Archmage has submitted to Governor Richton's rule, and forbids talking about or helping the Crowns for fear of the Empire shutting the guild down. This policy and his irritable behavior have earned him a bad reputation among current and former guild members. Avik in particular calls him "a spineless toad of a man".

After learning about Iszara and the soul gem, you can ask the guild's Apprentice, Falicia about them. A lengthy conversation ensues, but Jaganvir walks out of his study enraged. He must be sure you will never speak of what you've learned, so he casts a spell and turns Cyrus into a gremlin.

Falicia's Confession
Jaganvir comes out of his study and scolds Falicia for speaking of forbidden things. He casts a spell that turns Cyrus into a gremlin to keep the soul gem a secret.

(Same greetings happen when you knock on his study door, but Cyrus doesn't say his part)

"This really won't take long."
"The Battlespire test awaits. I have no time for you now. Please."