The UESPWiki – Your source for The Elder Scrolls since 1995
< Redguard: Quests(Redirected from Redguard:League Hideout)
Jump to: navigation, search 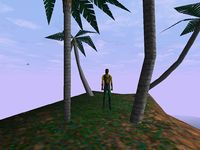 Lakene waiting to have a private conversation 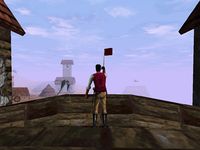 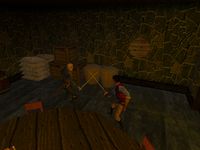 Taking the League insignia by force 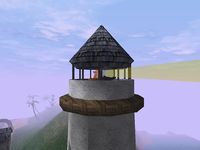 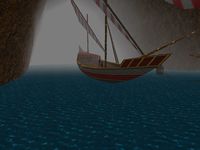 With the rusty key from the prisoner in the Catacombs, you have one of the items needed to contact the Restless League. The order in which you complete the objectives of this quest can vary, but this walkthrough presents the most likely course of events. More specifically, you can complete any or all of the Silver Locket section before doing anything in the Lakene section. Additionally, everything up to Smuggler's Den can be completed at the beginning of the game.

Also, if you want to receive some gold from Dreekius later, be sure to ask Tobias the topic "Leaving".

Lakene
First you must hear about the Smuggler's Den from Gerrick, Mariah, Prnell, or Siona. For Gerrick and Prnell, ask the topic "Smuggler's Den"; for Mariah, ask "Cartographer"; and for Siona, ask "Contact the League". Mariah provides the quickest way to reach the necessary topic: you just have to ask her about Iszara to unlock it. Note that Siona's topic only appears after escaping the Catacombs, which may not be the case if you want to complete this part of the quest beforehand.

Now talk to Krisandra in the Silversmith's and ask her "Smuggler's Den" and then "Lakene". She'll tell you about how Lakene came to her hoping she could make a copy of a silver locket he lost that belonged to his wife. Talk to Lakene in the eastern part of the city and confront him with your knowledge that he's been to the den. He asks that the conversation be taken elsewhere, meaning by the cliff farther east. Once he has walked over there, enter dialogue again. Ask for the password and he offers to give it if you retrieve his locket from Rollo, who won it while gambling in the Den.

Silver Locket
The silver locket is hidden in a chest in Rollo's house, but he sits on the chest unless called to the docks by the bell. Favis, the operator of the Bell Tower, won't let you ring it, but he will do it himself if a flag is waved from the Harbor Tower. This flag is owned by Prnell, who watches for incoming ships from the Harbor Tower, but he won't let you borrow it until you give him his eyepiece, which is found in the Bell Tower.

Therefore, head over to the Bell Tower and climb the rope in the middle of the room. The eyepiece is sitting on a ledge that you need to jump over to. With the eyepiece, go to the Harbor Tower to the west. The actual door is the one up the stairs. Inside, climb the stairs to the third level and exit out onto the walkway. Prnell is located in the south tower. Ask him about Iszara or the Watch Tower to unlock the topic that lets you give him the eyepiece. Now you can ask to borrow his flag, which is lying at the base of his chair. Pick it up, go out on the walkway again, and wave it (make it your current item and use it).

Although you can't see him from here, Rollo will emerge from his dwelling and walk down to the docks. There is a time limit: once he gets back, he'll just sit back down on the chest again. His house is next to the Draggin Tale on the other side of the well. Enter it and open the chest to find the locket. Return to Lakene and give it to him; he will reveal that the Smuggler's Den's password is "spoon".

Smuggler's Den
The Smuggler's Den is behind the Cartographer's, down some stairs. Without the password, you'll be refused entry. Now that you have it, though, you can go in and speak with Urik, the man in charge of the Den's operations. Question him about Iszara and then malachite to ask him for a League insignia. This item will prove to the League that you can be trusted. Depending on how you talk to Urik, he will either give it to you for free, for 100 gold, or after you fight him. The paths that lead to a free insignia are:

If you can afford the 100 gold, Hand it Over — Pay for it — Try Me is the only path that makes you pay him. All other paths lead to a fight. If you choose to fight him, he is about as tough as an elite guard.

Saintsport
Now that you have the rusty key and the insignia, you can travel to Saintsport south of town. Be sure to bring a torch with you. You may want to enter the Observatory on the way there to ask Erasmo about ghosts in the Saintsport lighthouse (however, this is unnecessary). He is constantly saying "flash, flash, flaaaash", which turns out to be the signal for the Restless League to dock in Saintsport.

If you stray too far into Saintsport, you may encounter an island thug there that attacks you immediately. The lighthouse is close to the docks and the door can only be unlocked with the rusty key. Make your way up the spiral stairs and use your torch to light the pyre at the top. Pull the lever nearby to open and close the shutter that flashes the light. The correct sequence is two short flashes followed by a long one. A short flash should be an open followed quickly by a close. However, the long flash can be almost as short as the others; the main difference is that it can also be up to three times longer and count.

A Restless League ship will pull into port with a woman named Yaeli standing on deck. Tell her you know Iszara is in the League and show her the insignia. The ship will depart for their hideout.

League Hideout
When you arrive at the League hideout you should go find Basil. He can be found with Vander, a local cutthroat, on the opposite side of the hideout. To get over the buildings, you have to climb some stairs and walk along the narrow raised pathway. Swimming is another option. Talk to Basil and ask him about Iszara, then dispel the notion that you're her messenger boy. Finally, ask why Iszara would be part of them; Vander will have enough of Cyrus' attitude and pull his sword. He is fairly tough with 80 health, double that of a veteran guard. Defeat him in combat and talk to Basil again to receive a bandage and a key to Iszara's lodge. He informs you of a locked journal Iszara kept that may contain answers. If you got injured, be sure to talk to Vander also to receive a second bandage.

No matter if you got injured, use the bandage to make it bloody. Head back to the side of the hideout you arrived on. Iszara's lodge is the large building in the corner. Unlock the door and use the bloody bandage to unlock her blood-sealed journal. This starts a cutscene in which Basil explains Iszara's involvement with the League and how she stole the soul gem of Prince A'tor in an effort to restore him to life. The cutscene ends with you on the Saintsport docks at sunset. The time of day will remain this way until the next quest, which has you seeking answers with this new information.

You can return to the Draggin Tale to find that Tobias has left Stros M'Kai. Assuming you asked him about when he was leaving before going to the hideout, you can talk to Dreekius to receive 47 gold he left behind for you. 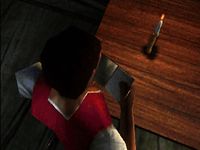 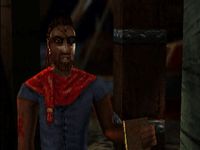 "When Iszara joined the League she changed its face." 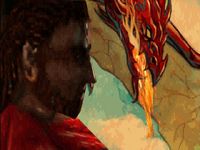 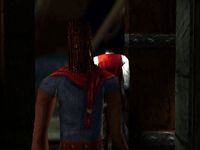 Cyrus prepares to leave the hideout, knowing that Iszara left with the soul gem 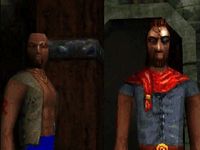 "This is bigger than your sister, Redguard. Remember that. This is about the kingdom!"

This scene triggers when you read Iszara's journal. Basil walks into Iszara's lodge while Cyrus is reading the journal, and Cyrus throws it to him.

Cyrus: "Where is she?"
Basil: "I don't know. I was hoping this would tell me."
Cyrus: "What do you know then?"
Basil: "When Iszara joined the League she changed its face.

"She gained us the attention of Prince A'tor.
"Before Iszara, we were a wild pack of nationalists with sharp swords and enthusiastic schemes.
"Our wanting reputation kept A'tor from announcing an open affiliation, but we worked for him in secret
"removing Forebear traitors on the mainland and killing Imperial emissaries too long lingering at our borders."

Cyrus: "And then the war came all the way to Stros M'kai."
Basil: "Where A'tor should've won. He had Hunding's fire with him that day

"he would turn back Tiber Septim from Hammerfell forever!
"The League wasn't invited to join in the Battle for discretion's sake
"and we were forced to watch from afar! And at that battle, we saw the face of the New Empire.
"They sent a dragon, and no man could stand against it."

Cyrus: "It killed Prince A'tor?"
Basil: "A'tor challenged the beast, but he never reached it.

"A poisoned arrow from Richton's henchman felled the Prince just as he rushed headlong to meet the dragon."

Cyrus: "What does this have to with Iszara?"
Basil: "As A'tor lay dying his wizard, the archmage Voa, tried desperately to save his life.

"The dragon was upon them and there was little time.
"Voa gathered A'tor's lifeforce into a soulgem just as the fire rained down.
"The Battle of Stros M'kai ended then, and Iszara's trouble began."

Cyrus: "Get to it."
Basil: "In another story altogether, the League got its hands on the soulgem,

"reservoir of the Prince's power, and the narrative of wishful thinking began.
"The Restless League now had the means to bring back the Prince!
"We could restore Prince A'tor from the soulgem, and under his banner fight the Battle of Stros M'kai again,
"this time rightly at his side!
"And then that little witch took it."

Cyrus: "Iszara took the soulgem?"
Basil: "And with it the fate of Stros M'kai.

"The Prince's spirit within that gem was the spark to ignite a revolution.
"When Iszara stole the soulgem she stole from us that fire."

Cyrus: "Where would she have gone with it?"
Basil: "If we knew that, you wouldn't be here right now. The only reason we let you in the hideout was to find out what you know...

"...or what this could tell us. We both seem to still be looking for our answers yet."

Cyrus starts heading out the door to Yaeli's boat.

Basil: "Find the soulgem and you'll find Iszara."
Cyrus: "Take me back to Stros M'kai." (to Yaeli)
Basil: "This is bigger than your sister, Redguard. Remember that. This is about the kingdom!"

The boat moves away from the dock. Basil and Vander are standing outside the lodge.

Basil: "This is about Hammerfell now.

Vander: "Maybe just the damn fool we need to find Iszara and the soulgem."
Basil: "Maybe so...."