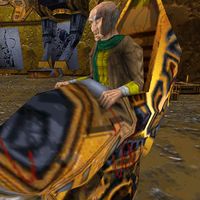 Erasmo is an elderly Bosmer living in the Observatory. He moves around in a device made from Dwarven machinery. Lord Richton ordered him to fix the mechanism at the Observatory, threatening death if he failed. Erasmo managed to repair the orrery, but he burned his legs in the gear room and refuses to go down there anymore. In order to fix the telescope, he needs a Dwarven gear.

He has been driven rather mad from Richton's pressing demands and lack of sleep due to the flashing of the Saintsport lighthouse at night. The elf claims ghosts are responsible for the flashes and want to torment him. Contrary to Erasmo's belief, the lighthouse is used to signal the Restless League and gain access to their hideout. He repeats the signal code many times: "Flash! Flash! Flaaasshhh!"

"Greetings, I am Cyrus."
"Aaahh! You scared Erasmo!"

If you fixed the telescope:

"What do you know about the island?"
"I know Erasmo's ass is stuck here till I fix this contraption! Aaahhh!"
"What?"
"Nothin'! I'm just doomed! Aaahhh!"

"You ever run into any pirates? Anybody known as Restless League?"
"You the first person I've seen in a while. Flash!! Nobody comes up here, especially pirates! They scared, run away!"
"Run away from what?"
"Da ghosts!"

"I'm looking for a woman named Iszara. Have you heard of her?"
"I hear many things. I hear the pipes rumble, the gears turn, and the whistle of steam! Funny, Erasmo never hears any women."

"What is this place?"
"What! Place scares me now! Some ancient Dwarven observatory....flash! Flash! Flaaasshhh!!"
"What...?"
"Richton ordered me to fix it, but the ghosts keep me flaaasshhh!! Awake!"

"Have you ever been to the Palace?"
"Once, before the ghosts! Delivered some Dwarven books to Richton. You don't go in there unless you have something he wants."

"You say this place is Dwarven?"
"Flash!! Dat's what Erasmo said! Them Dwarves knew a thing or two. Richton sent his men to the ruins, and me here to fix this, flash! Flash! Flaaasshhh!, Contraption!"
"Flash!...?"
"...Flash! Flaaasshhh!!"

"You mentioned the Dwarven Ruins?"
"Dwarves...flash! Flash! Flaaasshhh!! Liked to build everything in small pieces!
"Damn gugglies split without leaving instructions on their, flash!!, Toys! The ruins too big and scary for me! See for yourself, go to the west!"

(Unlocked by "Observatory" or "Palace")

"Why did Richton send you here to fix it?"
"Aahhh!!"
"Hey, man, stop screaming."
"But Richton kill 'rasmo if he not fix! I was living here, lots of space and pretty metally stuff! He let me stay if I fix...if not, he say cut off Erasmo's arms and put me in a eehhh, box!"

"What about the lighthouse?"
"Saintsport ghosts will get you! Get you! Flash! Flash! Flaaasshhh!! Their lights will haunt you!"

"Lights in the lighthouse? You're not making sense."
"Damn lights -- on then off, flash! Flash! Flaaasshhh! -- Keep my ass up all night!"

(Unlocked by "Stros M'Kai" or "Dwarves")

"Calm down. You look like you fixed it."
"Wooh. No. Not work yet! Fix the orrery, but 'rasmo can't fix the telescope! Eeeek! It won't fold down. Ghosts tried to get me, torment me, flash! Flash! Flaaasshhh!,
"But I put most of it back together. No magic either! That gear room make Erasmo's head hurt and burn his legs!"

"How does the orrery work?"
"Erasmo doesn't know! But it watches the sky! Dwarves knew the power of the stars, watched all the constellations and who they protected!"

"You burnt your legs in the gear room?"
"Eeeek! The pain! Steam down there hot as Oblivion. Yow! Burnt my legs trying to fix the telescope. Need another gear!"

(Unlocked by "Burn Your Legs")

"You need another gear to fix the telescope?"
"Dwarven gear! Not just any gear. Needs to go on the far side. Damn! I'd do it myself if it weren't for my legs."

"Constellations? Who do the constellations protect?"
"Flash!! Each other! Didn't your parents teach you about the stars of Tamriel? The 3 guardians each protect 3 charges from the snake!"

"What are the guardian constellations?"
"Every schoolboy knows of the Warrior, the Thief, and the Wizard. Of course, the Dwarves didn't believe in magic, so the Wizard is the Mechanist to them."

"What do you mean, charges?"
"Damn! You never read as a child! The guardians each protect the 3 charges of their circle. Flash!!
"The Thief watches the Lover and Shadow. Warrior the Steed, and on and on. You Redguards are slow!"

"What does the snake constellation do?"
"He slithers through the sky, ever changing with the stars. The Dwarves...smart to watch him, just as each guardian watches their charges."

(Unlocked if you have the Dwarven gear)

"Here's the Dwarven gear you need to fix the telescope."
"Ah haaa! You found one! Good, good. But I'm not going back down to the gear room. You gonna have to do it...put the gear in on the far side!"
"I'll give it a try."

(Unlocked once you fix the telescope)