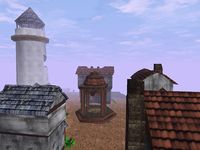 Saintsport is a small abandoned town on the southern peninsula of Stros M'Kai consisting of four dwellings and a lighthouse. An island thug resides here and will attack on sight if you enter the town, screaming, "It's *mine* -- all *mine*, I tell you!"

Initially all of the buildings are locked except for the southeast one which has no door. The interior is wrecked but contains three gold pouches, a health potion, and a strength potion. Four bottles are scattered nearby and on the east side there is loose dirt where the thug hoped to dig up the Flask of Lillandril. A wayshrine stands in the middle of town; its ceiling depicts a colored version of the illustration of Leki in the book Redguard History. Notably, her hand is pointing west, which marks the beginning of the path to the flask. There is a shrine of Kyanreth just north of the wayshrine and lying on the ground to the west is another gold pouch.

The lighthouse door can be unlocked with the rusty key that the prisoner in the Catacombs gives you. Climb the spiral staircase inside to reach a pyre at the top. If you look at it without a torch, Cyrus says, "This pyre's been lit recently. Someone's been here." To signal the Restless League, you must light the pyre and pull the lever to flash the light in two short bursts followed by a long one. Yaeli's ship will appear and dock at the pier. The first time you do this, Cyrus exclaims, "Finally, a ship's coming. Time to find out what these pirates know." Every time you summon Yaeli again, he will say, "Here comes the ship. I wonder if Yaeli can help."