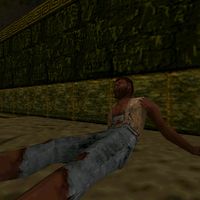 The prisoner is a dying man who is imprisoned with you at the start of the quest Escape the Catacombs. He is a member of the Restless League, but unlike many of his compatriots he was singled out for interrogation and torture. One such instance, in which he was stretched on a rack, left him paralyzed from the waist down. He managed to smuggle a key to the Saintsport lighthouse into the cell by swallowing it, which he gives to Cyrus shortly before dying.

"Where am I?"
"Beneath the Palace. Ancient catacombs. Nice place to rot and die."

"We've got to get out of here."
"Not me, pal. Not going anywhere. They broke something, and I can't feel my legs."

"Was there ever a young woman down here?"
"Who knows. Not since I came here, a few weeks ago."

"Who are you? Why are you here?"
"Just another League hero. But no execution for me... a little torture, interrogation, then left to die in this hole. Fooled 'em, though. Swallowed the key. Got it right here. See?
"Bit nasty when it came out the other end. Not looking forward to swallowing it again... though. Can't leave it around when they haul my corpse outta here."

"We've got to escape. Do you know a way out of here?"
"I'm going nowhere. That rack... must have broken something. Legs don't move."

(Unlocked by "Who Are You")

"The League... What about the League?"
"The League? We're a dying breed, man. Like everything else in this town since Richton came. We may not be much... but we're all that's left."

"Richton said Iszara is in the League is it true? I must know."
"Damn informers! Yes. Iszara's one of us. She's on Richton's list, all right."

A line that may have been intended as a reaction to Cyrus standing on the prisoner: